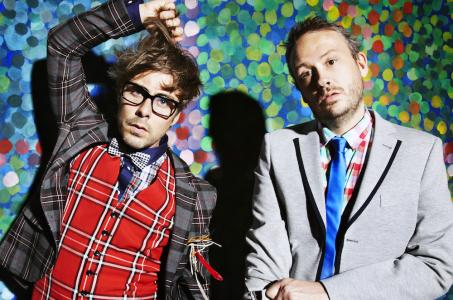 red alert, red alert it’s a catastrophe, but don’t worry, don’t panic, sunday night at camp bestival has always ended with a bang but this year will be extra special as we hand over controls to brixton dance legends basement jaxx to lead us to a suitably spectacular crescendo.

felix and simon have been in the game for twenty years now rising from the underground house scene through their own club nights basement jaxx and rooty.

in 1999 the boys took the leap from underground to mainstream success when ‘red alert’ the first single from their debut album ‘remedy’ smashed into the top five of the UK charts and the album became an instant classic.

never ones to rest on their laurels basement jaxx quickly became an unstoppable live proposition as their latin influenced vibes became an epic onstage extravaganza worthy of the streets of rio at carnival time.

throughout the last decade the hits have continued unabated, all six of their albums have succeeded in moving their sound forward whilst sitting perfectly between glistening pop and razor edge underground cool, as have their live spectaculars, they even headlined glastonbury in 2005 becoming one of the few dance acts ever to do so, leaving us in no doubt that this year’s finale at camp bestival will be our best ever.