a little while back i showed you the doors of the houses on some of my favourite streets of london town. if you missed that post you can see it just here. you see i know the streets of east end of london very well, as my father grew up in the neighbour hood and all of his side of the family all lived in the area too. when we first moved to england we too lived in the east end and a lot of my fist memories of england are from adventures around that part of town.

there are a couple of places that really stand out for me, and one of these are streets between brick lane and spitalfileds market.

nanny minnie and i used to trot up to brick lane once a week to go and get beigels and challah from the jewish bakery. sometimes we would go on to visit my great-aunt lil on columbia road, or sometimes we would just have a wander and potter around. nanny would show me all the hidden gems, and tell me things about the history of the transient community, the ‘melting pot’ of immigrants making their way through london. explain to me how spitalfields had got its name, by being a field next to the hospital which was gradually was shortened from hospital field to spitalfield. on the way home we would share a salt beef and mustard beigel from beigel bake. divine. i highly recommend.

the big tall houses used to fascinate me. they were so so tall for someone so small. they used to be much more battered back then, but gradually over the years they have been bought and shown much love. these houses have a history which only now do i know the detail of, and only now do i wander about synchronicity.

spitalfields and brick lane were pretty rural up until the great fire of london, and by 1666 traders had begun to trade beyond the city gates on the site where the market now stands. the black eagle brewery was opened in 1682, more commonly known now as the old truman brewery and in 1682 it was granted that a market could be held on thursdays and saturdays in the spital square. the success of the market encouraged people to settle in the area.

these houses were the homes of the huguenots, french protestants that had fled persecution in their homeland when the impact of the protestant reformation was felt throughout europe. in 1685 the edict of nantes was revoked, whilst exiling all the protestant pastors it also forbade the laity to leave france. however many did leave, often with great risk of execution. in total around 200,000 huguenots left france settling in all non catholic countries in europe. 50,000 came to england, seeking refuge and thus brining the word ‘refugee’ into the english language. as many as 25,000 of these immigrants settled in and around the south-east of england many of them around shoreditch.

there was already a silk industry in the area but it was small, but with the skills that the huguenots brought with them this industry absolutely thrived and spitafields became industrious and lucrative, and a major weaving industry was established around the streets of spitalfields and petticoat lane.

british upper class fashions began to change, as the availability of silk grew. the wealthier of the huguenots started to build these large houses for their families and for the weavers that they employed. the attics would have large windows to allow in the maximum amount of light possible for the weavers, whose looms would be up at the tops of the houses.

french soon became a very common language to hear spoken out amongst the streets of the east end of london.

however over time the silk industry began to decline, with cheaper fabrics being imported and the huguenots began to leave the city, the houses were broken up into workshops and lodgings and the area fell into poverty.

the huguenots were soon followed by irish labourers in the mid 1700s who were escaping the potato famine, working on the construction of the london docks.

the irish were then followed by eastern european jews escaping poland and harsh conditions in russia. from the 1880s up to 1970 the area was overwhelming jewish and one of the largest jewish communities in the whole of europe.

following the jews a thriving bangladeshi community has now flourished in the area.

these beautiful houses are now restored to houses and are homes to many artists including tracy emin and gilbert and george, and are used heavily for locations for shoots and films.

so where does syncronicity come into it?

well you see when i finished my a-levels, i went onto to art college and from there i went to university. to study?

then six weeks ago i discovered that on my grandfathers maternal side, we are indeed descendants of those very same silk weaving huguenots.

now blow me down… 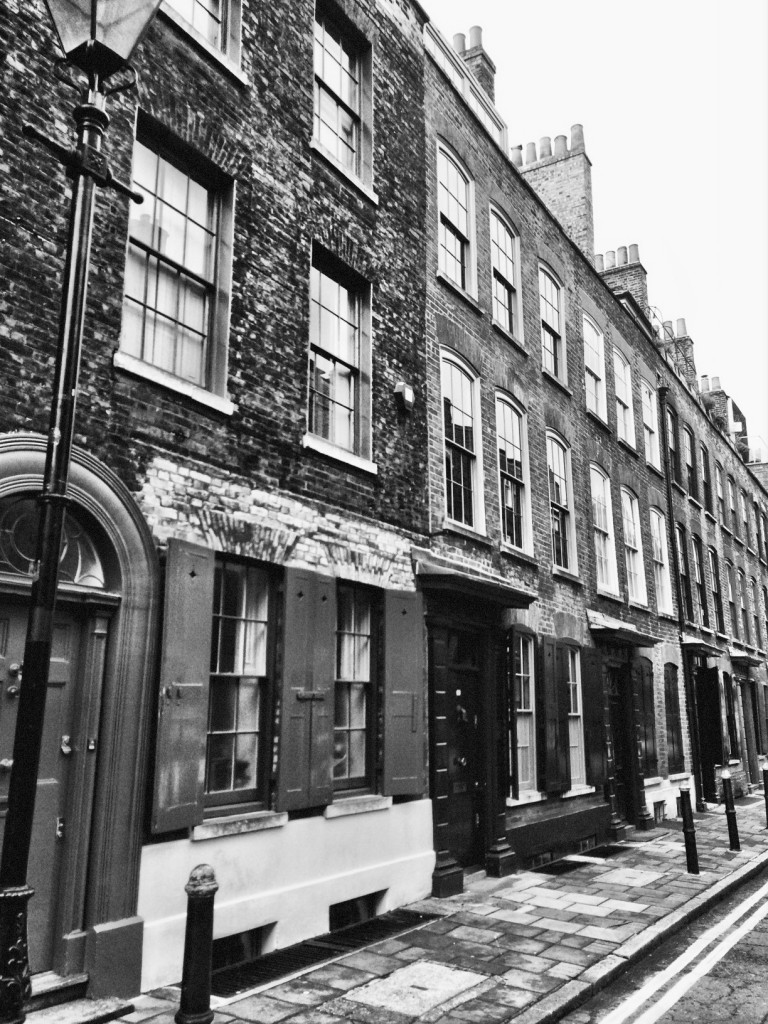 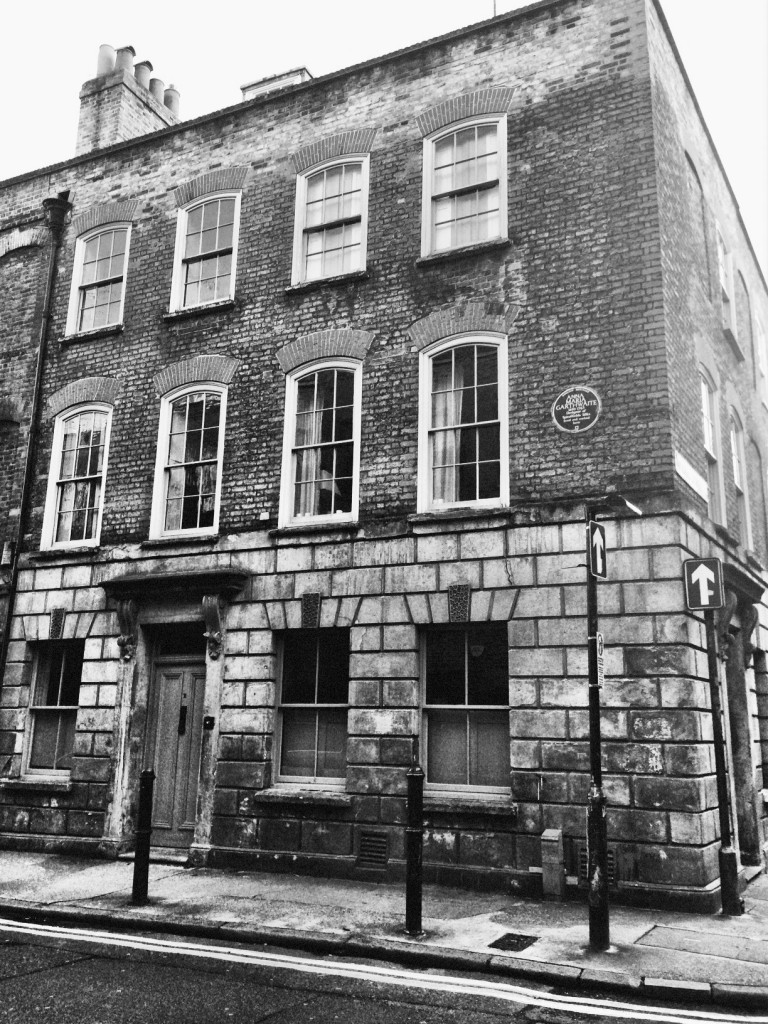 19 princelet street. only open to the public on a small number of days throughout the year this frail grade II* listed building was previously the home of the ogier family. a silk merchants home and is also home to a hidden victorian synagogue. 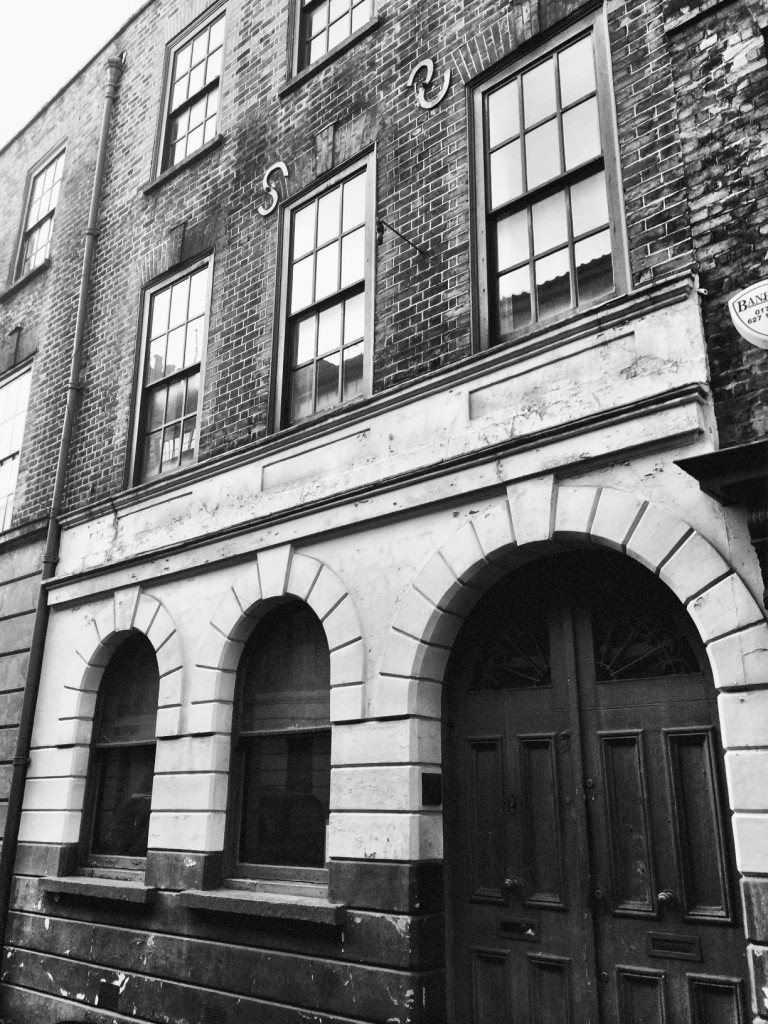 the spindles/spools that you see above the doors below were put there in 1985 as symbols indicating where the huguenots once resided in their silk weaving houses. 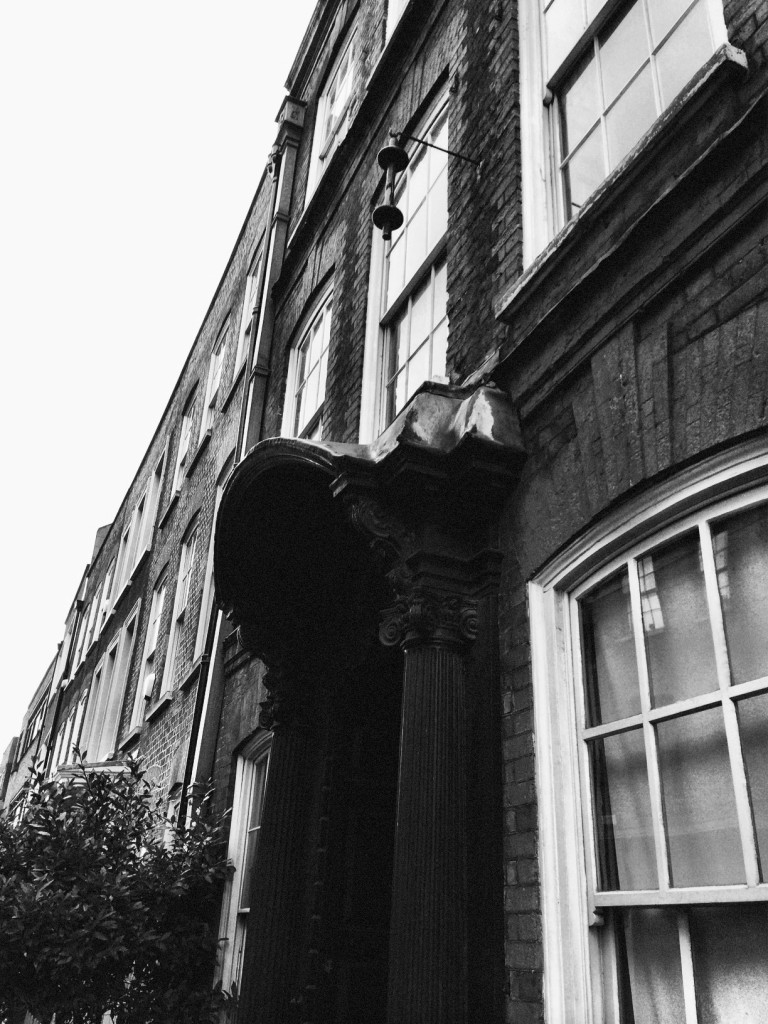 folgate street. dennis severs house. a “still-life drama” of what it would have been like to be a huguenot silk weaver. open every sunday from 10-4 and selected mondays.

sandy row synagogue. builit by the huguenots as “l’eglise de l’artillerie” in 1766 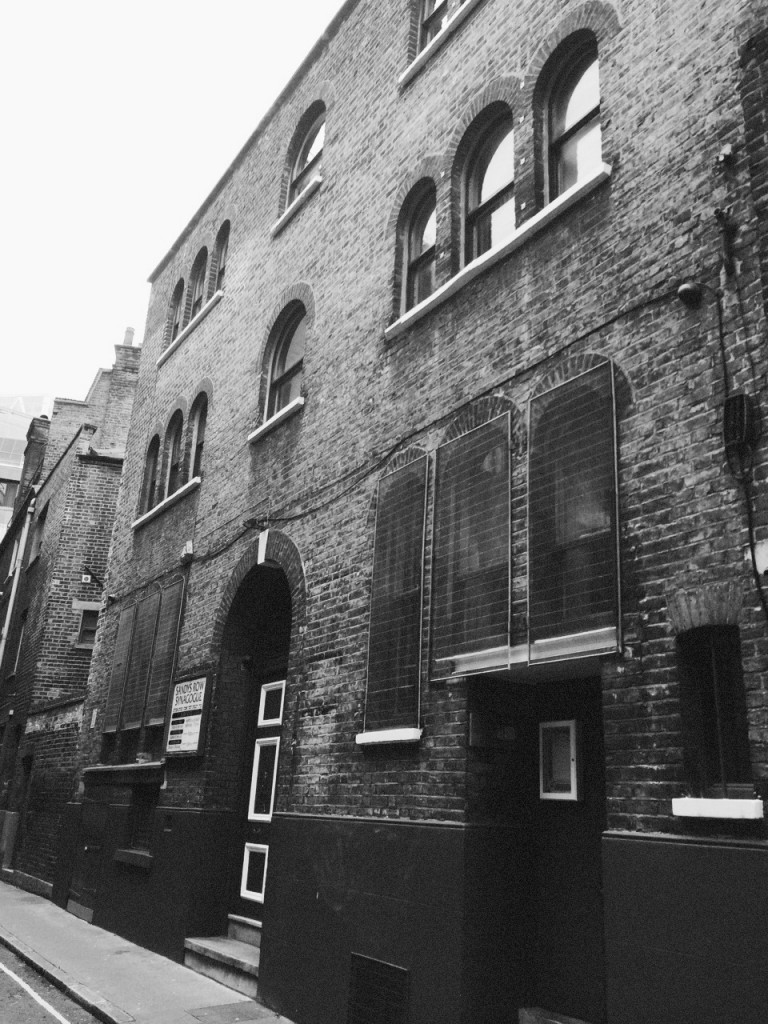 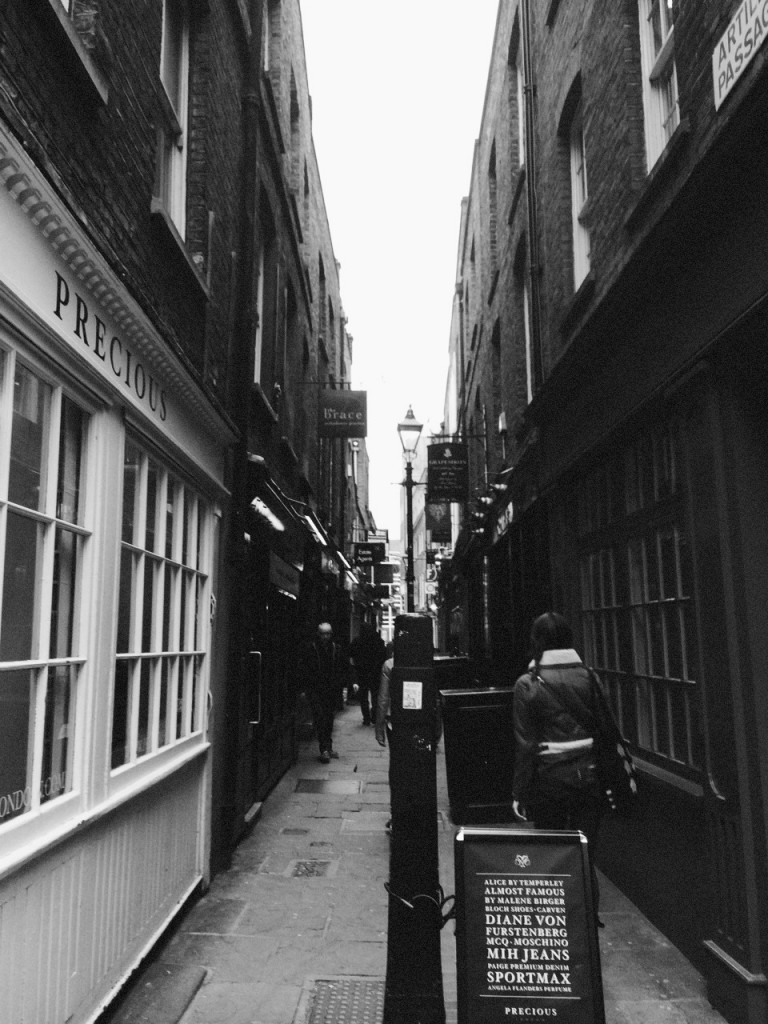 the remains of the providence row on the corner of gun street. a night shelter destitute men, women and children. 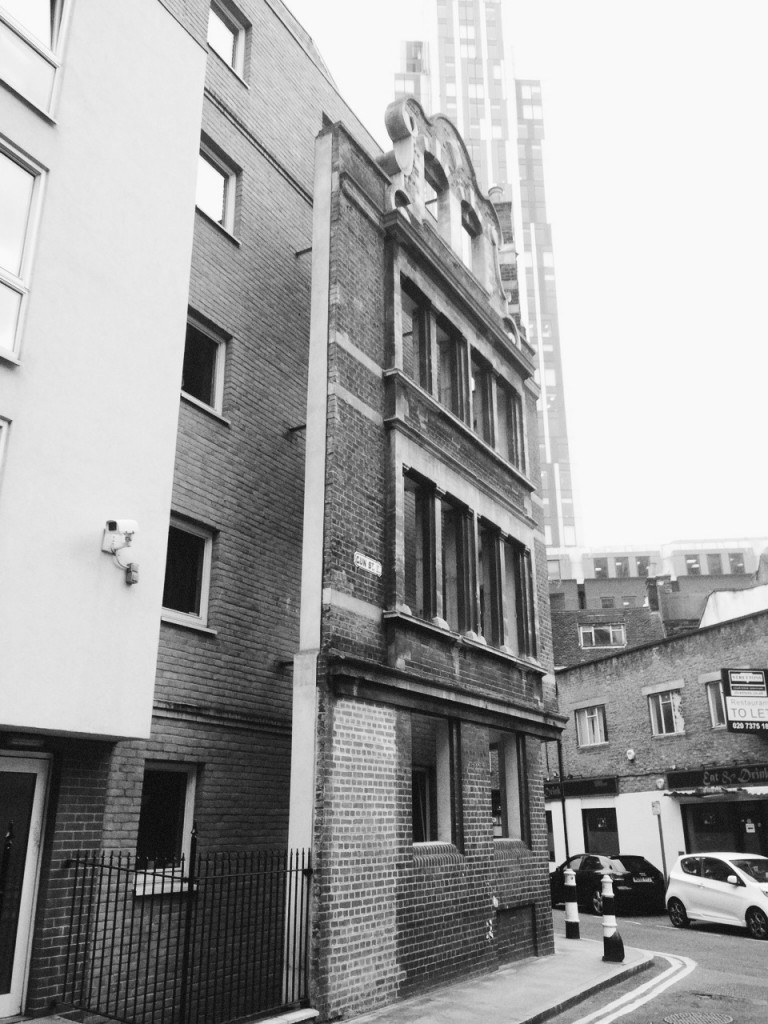 a restored shop front on artillery lane, which is thought to be one of the oldest in london. previously the home to a huguenot silk merchant nicholas jourdain, also director at the french hospital. 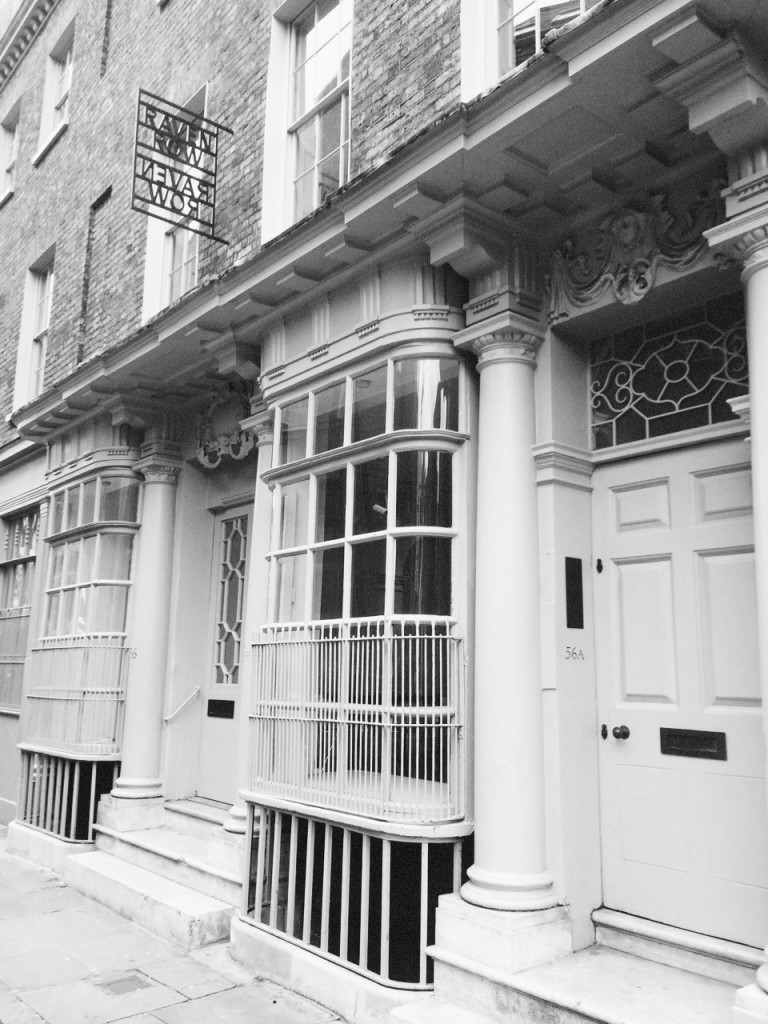