so 15 days after my due date i was summoned to the hospital, 7.30 in the morning we left the house and waddled the short distance round the corner to the hospital. once at the hospital i was promptly induced. i had hoped for a water birth and was pleased to hear that the birthing pool was free, however i was never to use it. the gas and air, was hopeless as i experienced minor panic attacks as i found it hard exhale. oliver on the other hand was enjoying it on the sly when no one was looking! i had tried to breathe my way through most of the contractions but i was struggling and getting tired. it was clear that the pethidine was pointless and so after 15 hours of labour i requested an epidural. i was exhausted and i really couldn’t manage the pain by myself anymore. the main problem was that i seemed to be stuck. i had dilated, but i had stopped at 7cm and i wasn’t going anywhere fast. my waters refused to break and it eventually took 3 attempts to break them!

the hours that past were a daze. finally though, nearly 36 hours later i was at 10cm. hurrah. we were ready to go. however when the midwives returned i was back at 8cm, i had a very high fever and ronnies heart rate had dropped to the 70 mark. things were not good. they took an internal blood sample from his head the results saying get him out and get him out fast. my epidermal was changed to full block and i was wheeled down the corridor to the theatre. with a tug and pull, just moments later ronnie was born. 8lb 8oz. 36 hours and 55 minuets later. i didn’t however get to hold him for nearly 2 hours. i saw him, i kissed him but then he was then taken away. he wasn’t making any noises you see, he didn’t cry and he wasn’t reacting to the injection he had just had, he was also very very cold. they took him away and warmed up under some sun lamps, a baby sun bed, and monitored him. oliver was with him, i on the other hand was being sewn up and put back together but also  my body had gone into complete shock and was convulsing. i had to be held to stop me falling off the bed, and it took a long long time to subside, so even when ronnie did come back and he was given the all clear, i couldn’t hold him through fear of dropping him because i was shaking so much. because i couldn’t hold him, i couldn’t feed him. his first feed was given to him by a total stranger. 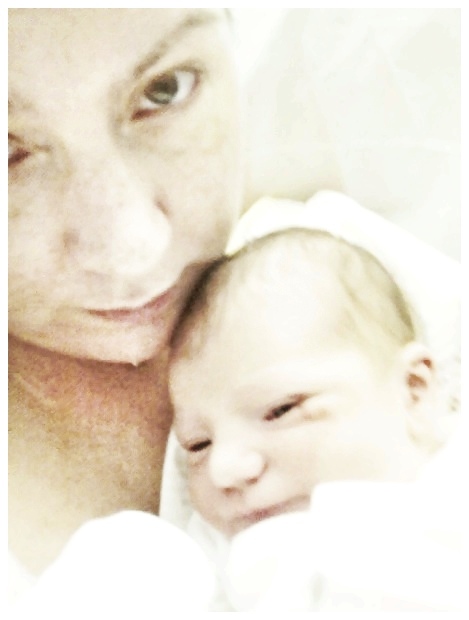 her labour had started at 8am Labour and it had progressed comfortably although contractions were 1.5 – 2 minutes apart from the start and lasting around 50 seconds. the hospital were happy that she appeared to be coping feel at home, however within half an hour the contractions had become very painful, she felt sick and was shaking. the hospital said to come in as contraction were now only 1 minute apart and lasting a minute too. on arrival at the hospital they discovered that she was only 2cm dilated but having contractions as if she was 7-8 cm. there hadn’t been much movement from the baby so the midwives hooked her up to the monitor quickly so they could check that the baby was ok. on every contraction the babies heart rate was dipping, so not only was the home birth out the window but the chance of a water birth now was too. the next 4 hours were a blur but she soon discovered she was quite the moaner and distinctly remembers hearing herself and thinking how ridiculous she sounded, the gas and air seemed to make it even worse but she didn’t really care.

after 6 hours she had only progressed to 4cm, and concerns for the baby were growing. the babies heart rate kept dropping only to stabilise when she lay on her side. the pain was becoming too much and c-sections were starting to be discussed, but with any respite from the contractions it was difficult for her to make a coherent decision. she requested an epidural and once that started to take effect she had time to think clearly, the baby needed to come out, quickly and safely so off they trundled to the operating room. she was given a top up to her epidural and the anaesthetist checked her tummy to see if it was numb, but before she could answer she had given the go-ahead for the surgeon to go ahead. however she could still feel around the top and right hand side her tummy. the cut was fine, but as they stretched her tummy upwards, she was in agony and could feel everything!!! she screamed in agony and everyone looked shocked. her husband was rushed out of the room and she was given a general anaesthetic. neither of them saw their baby being born, and it was 90 minutes before she came round to meet their son.

a week before her due date, her waters had broken in the middle of the night,  2.38am to be precise. It had been so strong that it woke her. however there were no contractions, but  went to the hospital to be checked. she was sent home and told to return in 24 hours unless anything else happened.

the following morning, she headed to the labour ward and was all psyched up to be induced. all day they tried to induce her in every which way, but to no avail. by 9pm she was put onto a drip, which had been her worst fear as she knew that things would start moving quickly and that it was likely to be more painful. she was told she could have an epidural at anytime.

her midwife milly, was fabulous and sure enough the contractions came in thick and fast. she was disappointed that everything that she had planned to do in labour was now shelved as she was confined to bed so that she could be monitored. she kept asking milly is this as bad as it gets and the response was always no! she was determined to do it without pain relief but eventually tried the gas and air. she didn’t like it much but instead used it as a distraction.

time seemed to go pretty quickly and the contractions were relentless. eventually she asked for an epidural, however just as the anaesthetist arrived she was told that she was 9 cms dilated and it was now too late.  after much pushing, and an episiotomy, their baby finally arrived at 3.24am. all was fine. he was perfect, he was wrapped up and put under the sun lamp whilst she was stitched up and all seemed very calm for a while. once the doctor finished stitching, she tried to pull herself up the bed. she felt something really uncomfortable internally which even today she finds difficult to describe. she was told that it was because she had just had a baby so therefore assumed it was. i didn’t seem like anyone believed her. the feeling didn’t subside, it just got stronger and stronger. she mentioned it again and again to the midwife and also requested that the doctor came back but she had gone to theatre. the pain grew and grew. she couldn’t move,she knew something was really wrong. when the doctor finally returned and examined her, she said it looked a little red but would come and check again later. but soon she was in complete agony. the pain was so unbearable, and she was screaming uncontrollably for the doctors. no-one came for a long long time. the midwife actually said she didn’t know what to do. all the doctors were in theatre and they were just left by themselves. after what seemed like a an absolute lifetime, two doctors arrived and tried to examine me internally this time. this was beyond agony. they put some pressure on her internally and they gave each other a look she will never forget. at this point she thought she was going to die. she was terrified. her partner was left holding the baby, they just could not believe what was happening. the room suddenly filled with people. people trying to get her to sign forms, people trying to put compression stockings on her, people trying to put her back on gas and air. but no-one could tell her what was wrong. they had no idea. all they knew was that this was really serious. she was being taken to theatre and at this point she thought that she wasn’t going to make it back. it was hideous.

she woke up in  HDU after being in theatre for 90 mins. it was then that she was told that she had suffered from a mass haematoma. she had never even heard of this before and the doctors explained that this is when the blood vessels behind the stitches hadn’t knitted together so carried on bleeding with nowhere for it to go, and therefore it was building and building inside causing the immense pressure. they had to un-stitch, drain and re-stitch. we were told it was lucky that she had got back to theatre when she did. she had lost a lot of blood and was in HDU for 3 days on a drip and was unable to move. she was very weak and had to have a blood transfusion the following day. she remained in hospital for a week in total and it took a lot longer to get any sort of strength back.

looking back she can’t help thinking that there was  a reason she couldn’t have the epidural and that if she had she may have never have felt that anything was wrong and the situation could be so very different.

so there you have it, 3 stories from 3 friends. if anyone one of us had been mothers in bangladesh we would most certainly not lived to tell the tale.

we can change this.

if you have 2 minutes, why don’t you sign the save the children break the chains of hunger  chain letter to david cameron. at the g8 summit in may, there is an opportunity to free millions of children in this world from a life of hunger.

share it, blog about it, re-blog it, tweet about it, retweet it, post about it on face book, tumblr, stumble upon, google+ get the message out as far as we can.

very soon you will be able to buy the book, watch this space… 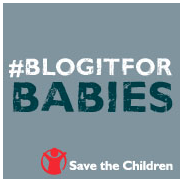 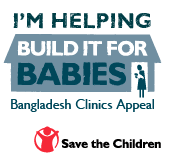 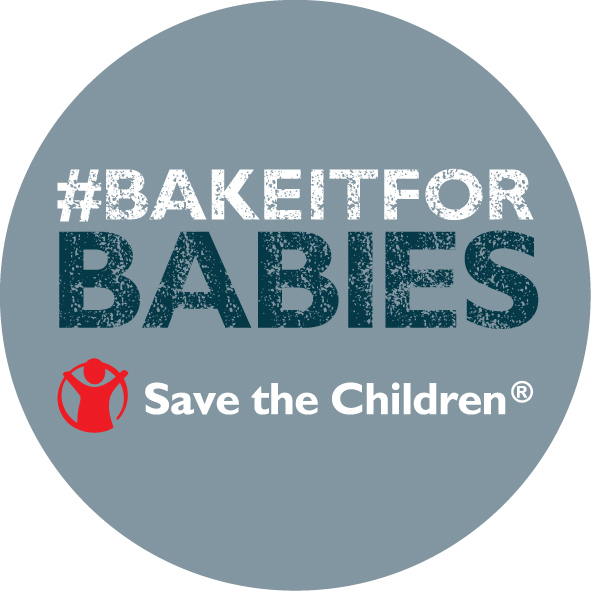