really this week has been quite testing, i’m am cream crackered

all going at top speed at work

and then yesterday i came home to stupid neighbours

i arrived home to find that the house behind us had 3 bonfires lit in their garden and all the smoke and bonfire stinkiness was wafting straight into our house. it literally smelt like the fires were actually in our house. it irritated me, but i let it go and lit some candles to try to get rid of the smell. tuscan fig can smother anything. later however, i went into check on ronnie whilst he was sleeping and his room positively stank. i thought this is not good, this is not good at all. it was gone 11pm and there’s was no sign of it letting up. 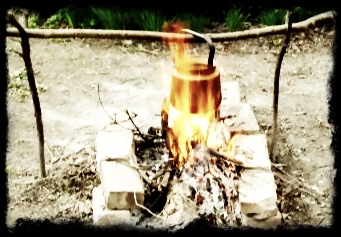 (this is not the actual fires, he had three of the feckers and were much bigger but you get the jist, ya?)

i trotted over to our room to have a gander out the bathroom window to try to suss out the situation. our room stank too. we are the first house on the close and we are on a corner so we have a bit of an odd-shaped garden but it works well, we have a westside and an eastside. this means that our bathroom room window is at the thinnest point of the kitchen garden and is only around 5m away from the fence between us and them. the fires were all burning at full pelt and i noticed someone shifting around poking here and there. i called out “hello is any one there? are you going to put those fires out soon, i have a child asleep and his room is full of smoke” the figure looked up, grunted at me and continued to poke. maybe he didn’t hear me? “hello, can you hear me?” nothing “hello, i’m up here in the window *waving madly* can you here me?” the figure took a step forward, he looked straight at me muttered something completely unrecognisable and stomped off towards the house. well that was a success……

the moment he got to the house a flood light turned on and i could fully see what was going on at the bottom of his garden. 3 fires, all with giant cooking pots on them. he was cooking his dinner surely not??? i pulled the window too and shuffled off to find oliver, whose eye sight is much better than mine. he confirmed yup that’s 3 massive cooking pots. seriously why?

i attempted again to catch his attention and again he completely ignored the fact that his neighbour was trying to talk to him and alert him to the smoke coming into our home. an inconvenience for him i know. he was really starting to feck me off so instead of getting out of my pyjamas and going round to knock on his door and say “hey what’s with the fire man?” i decided to stay in the warmth and call both the police and the local environment officers. mean i know, a bit of snitch, yep i know this too. but jeez this guy was in his own world and really didn’t have any awareness that his midnight snack activities were a hugely unsociable thing to be doing and most of all it was late and i was tired and irritated. so i snitched so ner.

i must say though i was really most impressed with both the police and the environment officers. i had called 101 and the local police in east dulwich called practically immediately asking me in detail what was going on. they advised that i contacted the environmental officers, which i had already done, and that if that was unsuccessful to call back and they would go round and enforce that he puts the fires out.

the environmental officers turned up a 12.30am and took one whiff inside my house and said they would go straight round and get the fires put out. and sure to their word, within 10 minutes i could hear buckets of water being poured over the fires. victory was mine hurrahhhhhhhh.

we woke this morning, to still having a stinking house it was lurking everywhere and within 15 minutes of ronnie being awake he was being sick. now that might just be a coincidence but i reckon that silly man and his stupid fires and all that smoke wafting its way over to our gaff was completely responsible for me getting covered in milk vom this morning.

not a happy HPMcQ, not happy at all

in hindsight in should have caught the vom and slung it in his cooking pot. ha munch that rude man.