yesterday i had a very stressed friend of mine quizzing me on what to do about getting shot of her daughters beloved dummy. she really had gotten herself into quite a tiz and knew it that it needed to be done, but the thought of making the first move was terrifying her. weirdly i came home and someone tweeted exactly the same thing. so i have decided to care to share.

ronnie had a dummy, which at points were the much-needed off button. but as he started to move from being a baby to a full-blown toddler, i increasingly found that the sight of him with a dummy really started to irritate and annoy me. we had never really encouraged or allowed too much use of it in the day and we started cut this down even more, unless he was poorly and needed that added comfort, so that part was pretty easy for us really. it was sleepy time that was going to be a struggle. also i wanted to get him to move from a bottle to a cup of milk too at sleepy time. but i wasn’t so brave to do both at the same time, what old meany mummy that would be. at 16 months we decided that your upright now so NO MORE DUMMY!!

this is what we did.

you will need are some tiny manicure scissors.

that’s right i snipped a tiny hole in the sucky part of the dummy, which rendered it suckiless! bingo. so that evening when we were getting ready for bed he asked for his dummy and i duly gave it to him and carried on putting his pyjamas on as normal.

hpmcq : oh no, we will have to put it in the bin now if it’s broken, come lets take it to the bin

we wandered back over to his bedroom, read a story and off to sleep he went

the next night we were getting ready for bed

hpmcq : ronnie you don’t have a dummy anymore, remember it was broken so we put it in the bin?

ronnie nodded his head, we read a story, and ronnie went to bed. 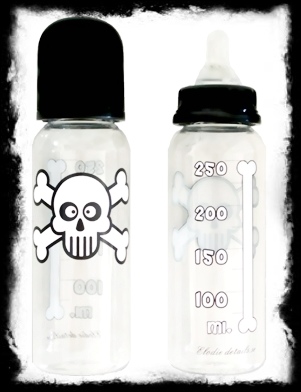 we left it a few months, actually quite a few months, unintentionally, to do the same with the bottle. i snipped the top so it was more obviously broken and really quite a flap of a hole. when it came to having his monkey milk before bed, i brought the milk up in the bottle with the tampered teat and also a cup.

hpmcq : oh no ronnie look the bottle is broken, we need to throw this in the bin it’s rubbish now. shall i put the milk into the cup?

ronnie climbed off my lap, took the empty bottle out of my hand and he wandered to the bin he opened the lid and he plopped it in

he wandered back over to me, we read a story and off to sleep he went