so three years has passed

i have mentioned he is three

so for his first and second birthday we didn’t have a party because well frankly, do they really know what on earth is going on? but now he certainly does so bring it on, a monkey pirate party!

now never having had the pleasure of throwing a party for a small before, i was really quite excited but the more i thought about it the more overwhelmed i got. 15 smalls, that’s a lot of noise and with smalls come bigs, normally 1 or 2, that’s a whole heap of peeps in the house. hmmmmmm a hall needs to be hired me thinks. panic over hall found yay! now invites, entertainment, food, cake, candles, decorations and outfits to source, not much on the list then on top of that day job!

invites were easy peasey between me and daddy oliver we are a dab hand at creating invites, cards and the like, so we banged our heads together and come up with a rather lovely monkey pirate hat that opened out on a burnt out map of where the loot was to be had and written in very authentic pirate parlez. in the post they went and waited for the rsvps. and let me tell you some people need educating on the rsvp front or rockets shoved up you know exactly where!

let me know if ye can join in th’fun. 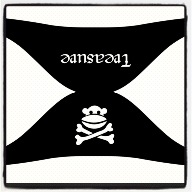 i had heard somewhere along the line of a franchise called diddi dance and always quite liked the sound of the name. great little company who run weekly groups of dance classes using various dancing games and exercises, bells, hoops, balalloons and dance ribbons to music from pop songs to salsa and hip hop to country and disco. They also cater for parties and very well they cater too, £100 smackeroons for an hours entertainment, i thought at first expensive but actually on the day it was worth every single penny.

with both of us working full-time we decided to cheat a little, m&s food to order on-line, pick it all up on the day at a store near you, job done yum yum.

i wanted to hang bunting and balalloons but discovered that the hall had recently been painted so they really didn’t want anything stuck to the walls, oh bugger. so the solution tin cans…. yep that’s right tin cans. filled them with shingle and a tiny bit of cement on top to keep it all in place with a bamboo stick stuck straight in the middle and black or red striped paper wrapped round the outside to hide the tin, ta dah. these would be my posts and from these i could hang my bunting and balalloons from. i put them at the end of the tables and merrily hung the pirate bunting from these, fandabbiedosi. clearly a pirate theme but i wanted to make sure it wasn’t to twee and matchy matchy so pirate plates and cups for the smalls, red table cloths and green napkins with a smattering of red, black and white balalloons. 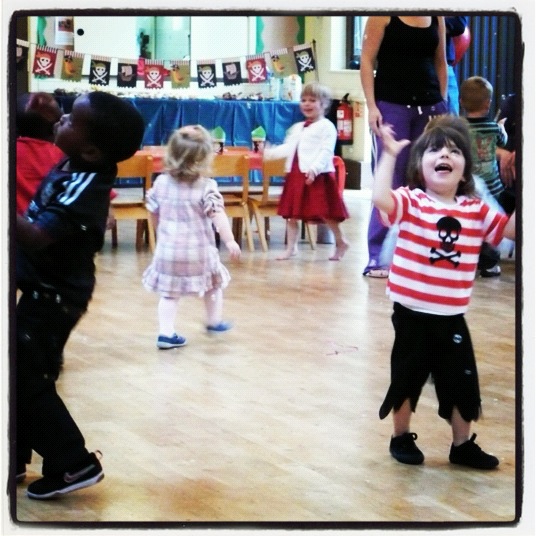 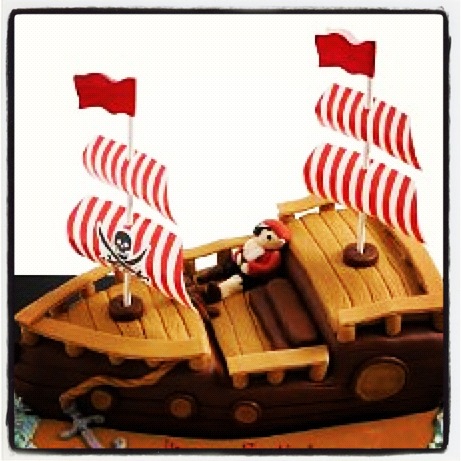 couldn’t bear all the naff party bags on the market so of course we made our own. the bubbles donated some clear sweet bags, oliver made a smaller version of the pirate invite with treasure written on the back, and i stuffed full of pirate bubbles, pirate bouncy balls, eye patches, pirate pencils and rubbers, pirate key rings, balalloons and of course pirate treasure in the form of gold chocolate coins.

so hall is ready, food is begging to be consumed, the cake is looking truly fantastic, a pirate boat no less with happy birthday caption ronnie iced upon the high sea. 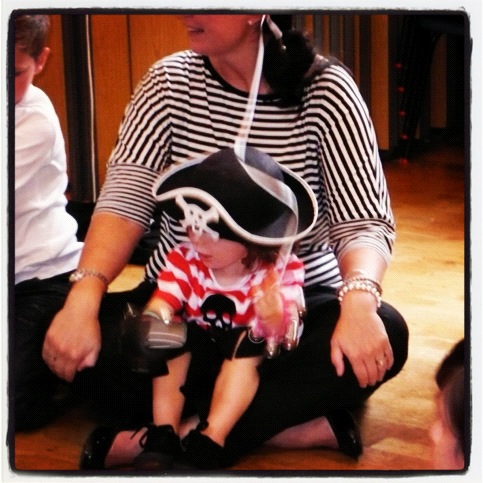 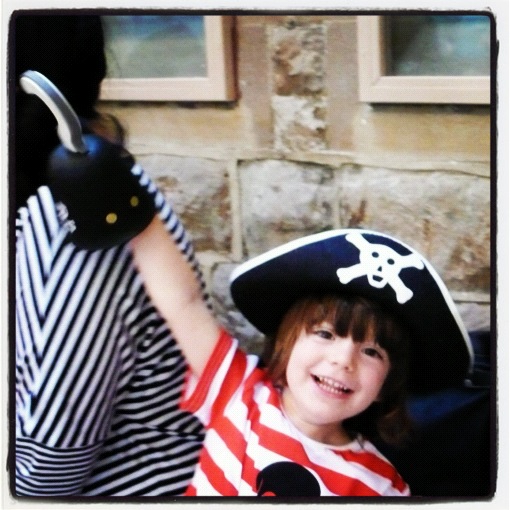