well june finished on quite a lovely note with lots of fun and definitely a lot of splashing around, both in muddy puddles, swimming pools and the adriatic sea

i’ve had hated and dreaded the theme park all through my youth and then now in parenthood at the anticipation that ronnie one day will ask to go and i will just want to shout NOOOOOOOOOOOOO not now not ever!

well i decided that maybe i should attack my fear head on and took us away on a little jolly to none other than peppa pig world! 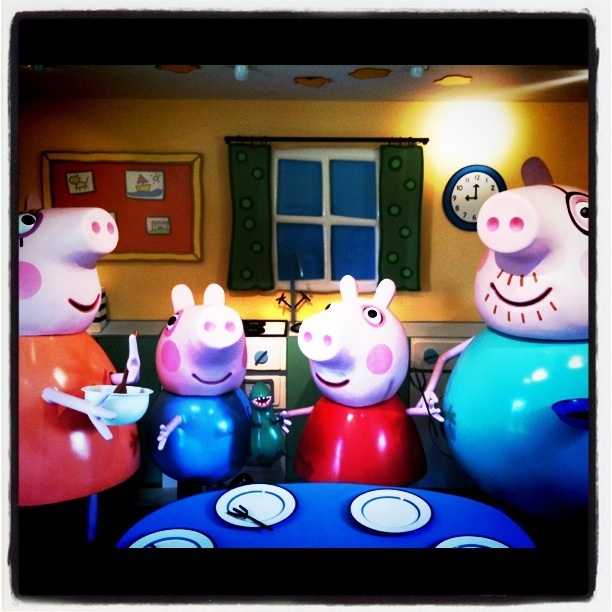 could have been tragic but turned out to be really quite wonderful, i know i can’t believe i just typed that either! but it really was quite pleasing. i can’t say the same for the rest of the theme park, as you see peppa pig world is a small part of the larger paultons park which we side tracked as it looked vast and everything i have ever feared in a theme park

we had travelled down from london in the morning, as the weather wasn’t favourable headed off to beaulieu national motor museum which was only 45 mins away from the glorious world of peppa 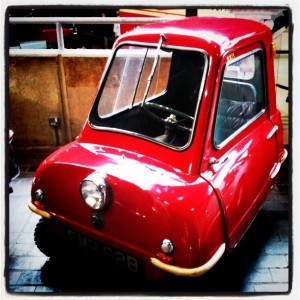 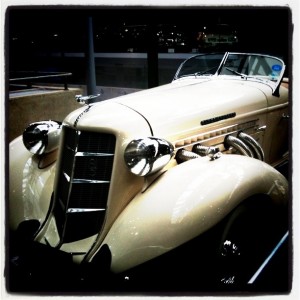 an absolutely amazing collection of cars started from a true family passion that appears to have got slightly out of control! a very eclectic collection of beautiful, functional & ridiculous motor cars, motorbikes and things that resemble aliens!

we had booked our selves into a family run b&b just 15 mins down the road from paultons for a couple of nights. cracking little place it was newton farm house. we had the garden room which had a separate living room for monkey to sleep in and we had bed picnics whilst taking in a movie or two. there’s a swimming pool and a trampoline and a smashing cooked breakfast.

after our hearty breakfast, the sun was shining and off we headed to see our fate!

pleasantly surprised we were, a lot of thought and effort had gone into the design and detail of the rides and the lay out of the park, it was impeccably clean and manicured to perfection 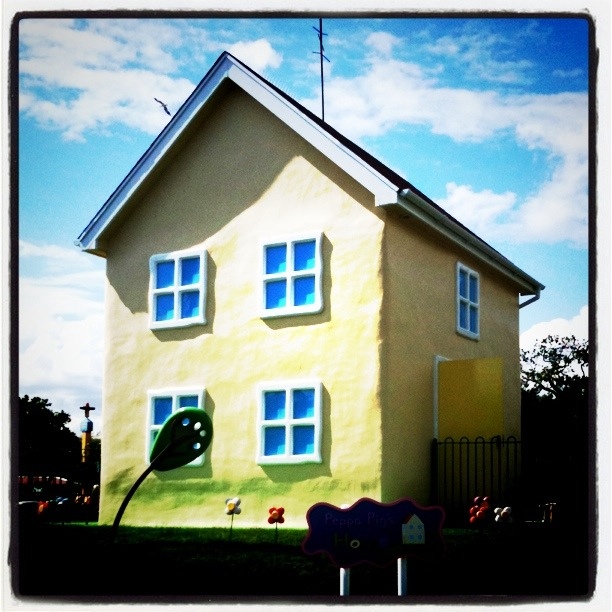 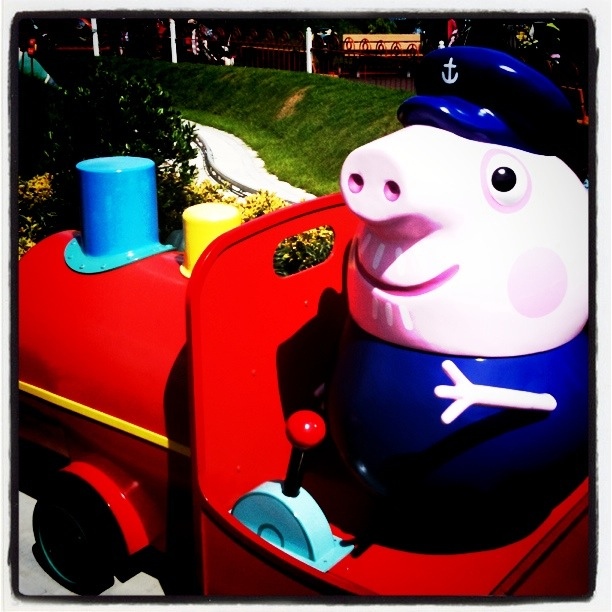 all the rides were great, grandpa pig’s little train, george’s dinosaur adventure, miss rabbit’s helicopter ride, daddy pig’s car ride, windy castle, peppa’s big balloon ride and grandpa pig’s boat trip. if you’re not great with heights i highly recommend that you don’t go on the windy castle ride with your evil other half who thinks it’s hysterical to spin the little cloud you sit in round and round whilst in turn the cloud is going up and over hmmmmm. however the helicopter ride was surprising steady and really smooth. 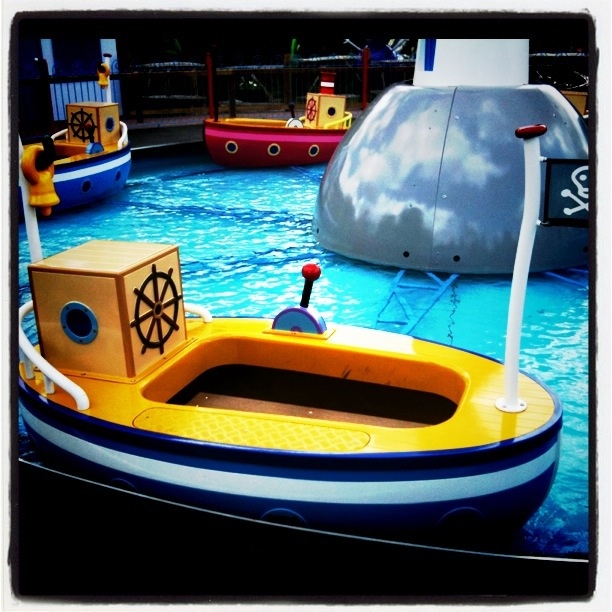 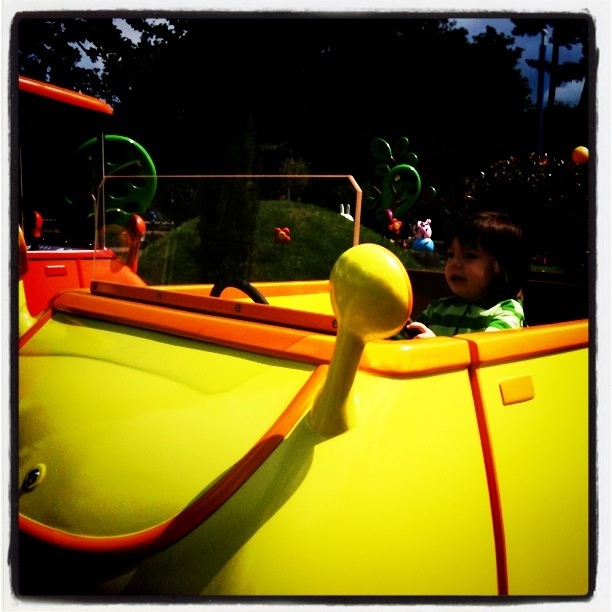 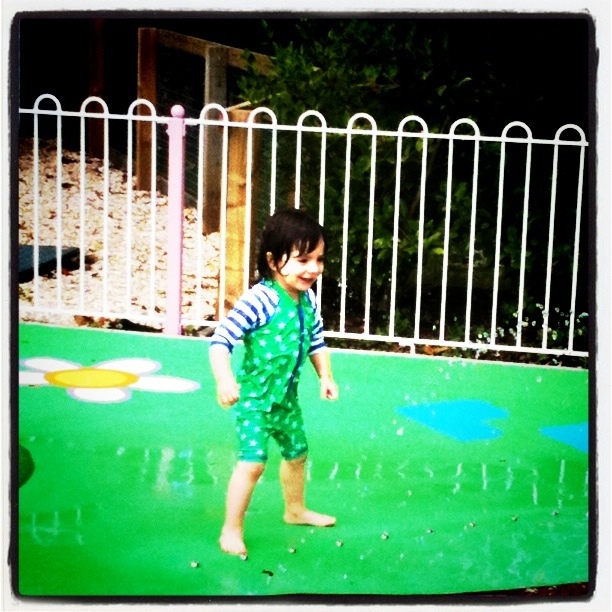 the indoor spaceship play zone is big enough for parents to take the smalls on with lots to climb and slide around on.

the school-house and peppa’s house are a bit pointless but at points throughout the day guests do get to meet peppa and george outside the school-house which scored masses of brownie points.

if you are going to go these are the key things to remember:

1. don’t go in the morning the queues were big and children don’t like queuing. from 2pm on everything was much quieter and much more civilised and there still would have been plenty of time to have a go on everything

2. take a packed lunch, the food is atrocious, you are remember, in a theme park, it’s shocking. there are plenty of benches and tables in mr potatoes playground, outside daddy pig’s cafe and generally here and there

3. take swimmers and towels so splashing in muddy puddles can be exploited to the max

so peppa pig world done home to pack and off to puglia!!!! now that’s more like it

now top tip for the beautiful puglia is DO NOT no matter what DO NOT fly ryan air, i think that’s all needs to be said

but aside of our appalling choice of air carrier puglia was absolutely beautiful and the restful week had all hoped for. we holiday’d with our gorgeous friends matt & lou who like us had been longing for a week of nothing for quite some time. matt & lou had scoured the inter web for somewhere to stay and boy did they come up trumps. we stayed in a converted trullo just outside the trulli capitol of alberobello. what wonderful little houses so many have now been restored into homes and rental properties so all the mod cons are plenty. 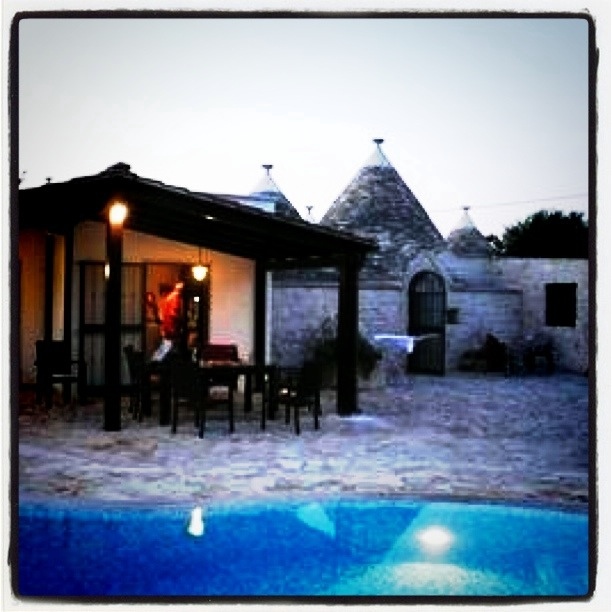 we hired our restored villa from a web site called trullo holidays. it was in the fields on the outskirts of alberobello, and consisted of 4 original trullis restored and extended to make a “trulli” (ha ha see what i did there?) wonderful 3 bedroom villa with private pool and generous patio with barbecue and amazing views going for miles and miles. with just one other villa next door which was barely in view you really felt that you were the only ones in the world. a dream place to rest your mind, body and soul. 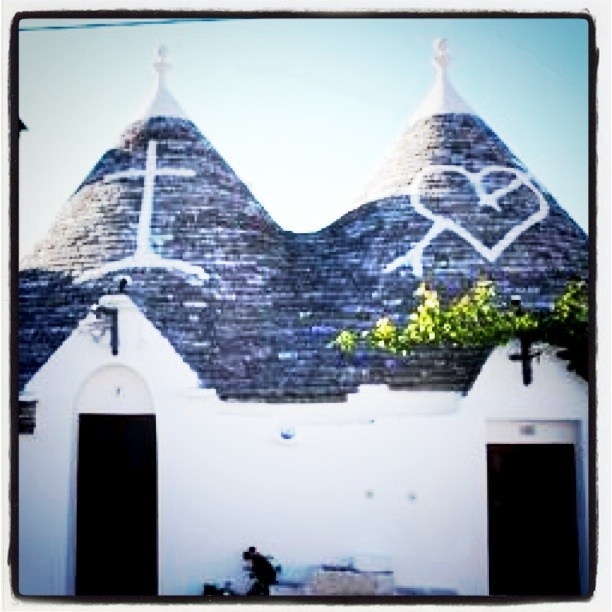 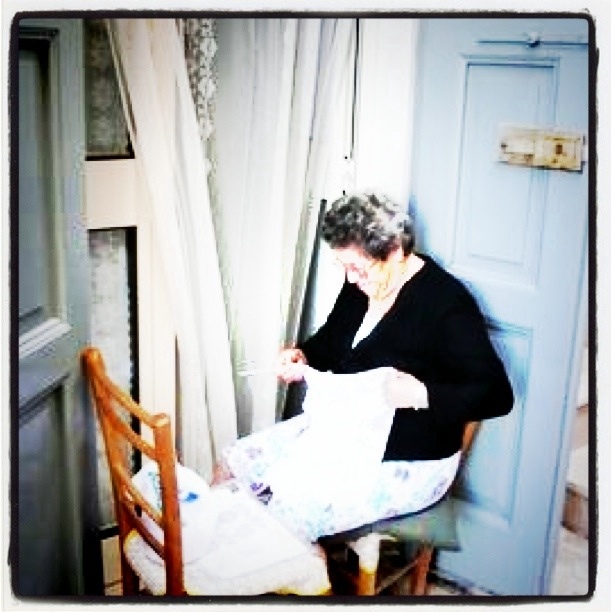 alberobello was stunning and surprisingly peaceful considering nearly every trullo has been converted in to some kind of tourist attraction or shop selling naffness. however there was the odd little lady sitting in the door without a care in the world completely focused on what the crochet of the day was which seemed to blank all the touristy momentoes away.

we ventured out every now and again, mainly for food and the odd bottles of wine, but yes we did get to the beach and nearby historical towns.

the beach which had been recommended to us was absolutely great for families. torre guaceto. you parked up the front in a maned car park and then caught the choo choo train down to the beach. here you could either hire loungers and parasols (bit pricey at 15 euros) or just plot up on the beach. there were toilets which were clean, a bar serving paninis, coffees and ice creams. the best part was that the sea was shallow, only up to your knees for a good 20 meters so the children absolutely love’d it as they could splash around without be bothered by waves or it getting deep and because it was shallow the water was wonderfully warm. 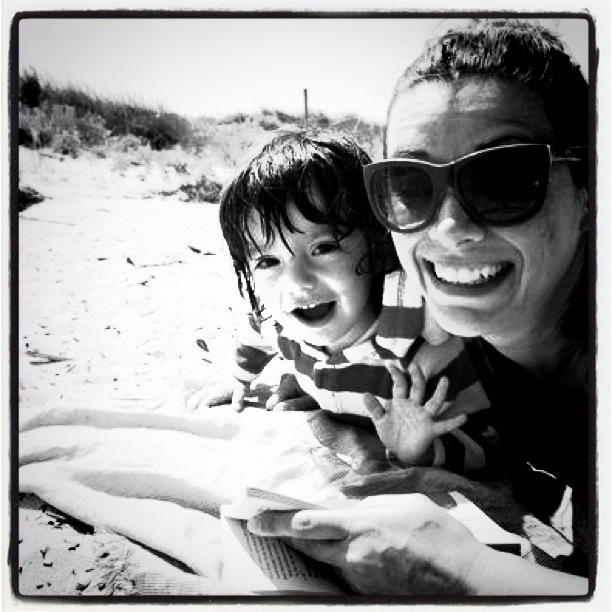 We didn’t really have a plan as such, other than a week of absolutely nothing, but we stumbled across some beautiful towns. locorotondo, ostuni, monopolio and polignano a mare to name a few. we definitely want to go back, but perhaps with british airways into napoli and most definitely when we are less knackered and have energy and much more time to explore. would be wonderful if we could go with matt & lou again they were such wonderful holiday companions x 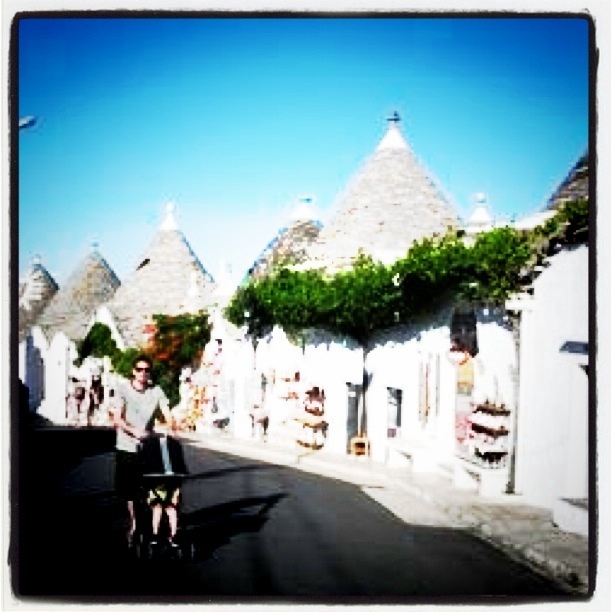 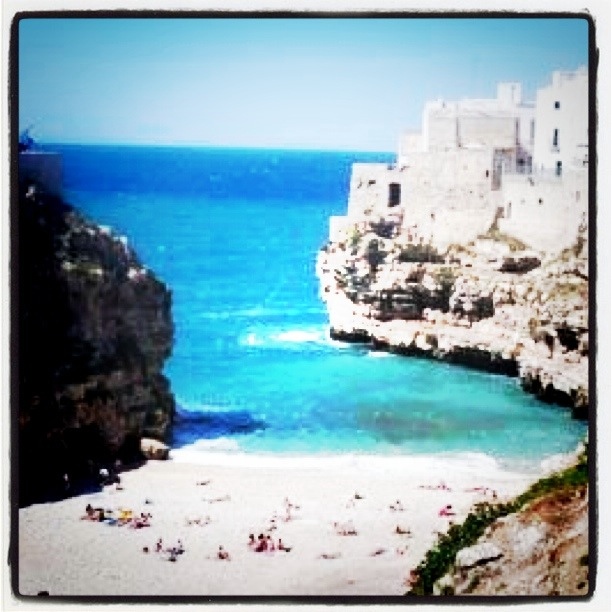 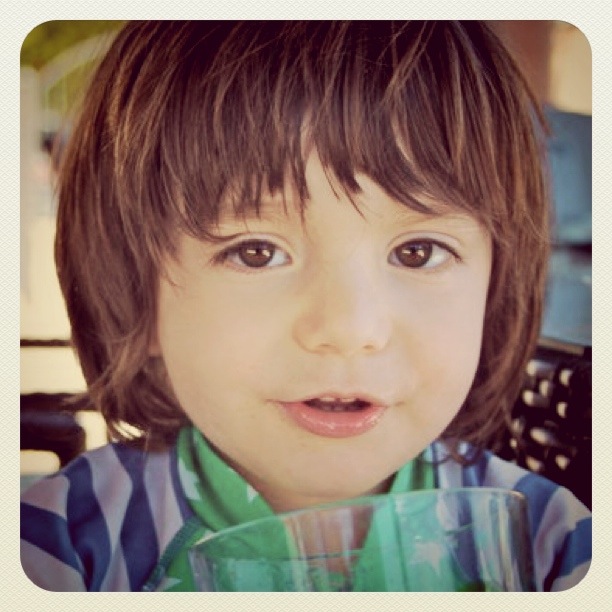