HPMcQ : what type of cake would you like to make? cupcakes or maybe nests with eggs

ronnie : i know mummy, i have an idea. let’s make nests and put them on top of the cup cakes, that’s a good idea.

HPMcQ : that’s a marvelous idea ronnie, let’s go to sainsbury’s (there are other supermarkets available this just happens to be the closest to where we live) 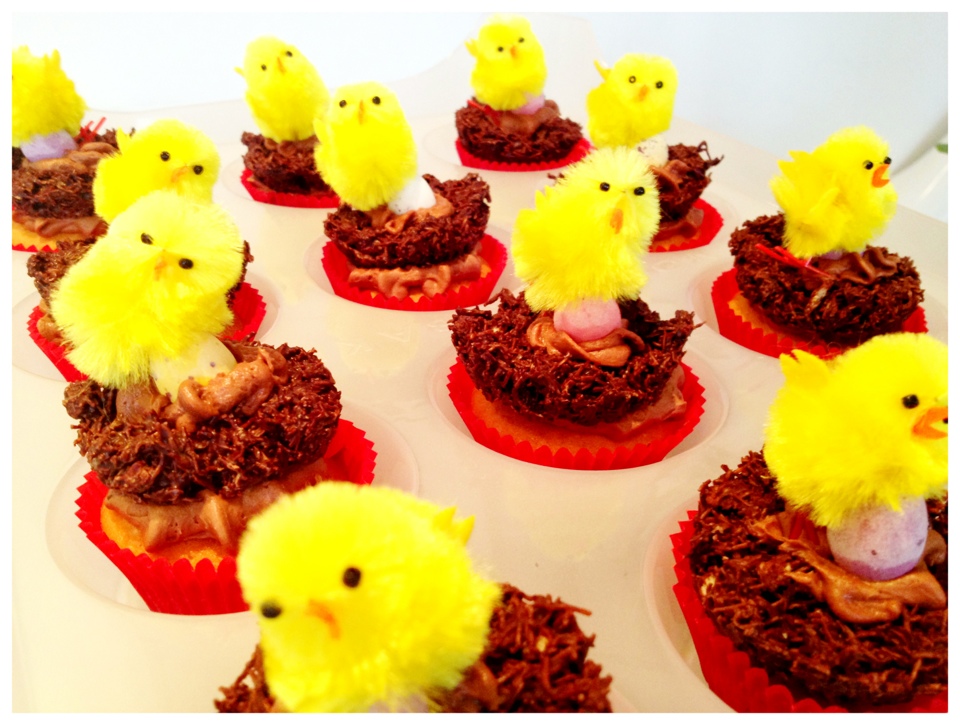 and this is how we did it

1. we melted the chocolate in the microwave in a chocolate melting pot, which i bought from lakeland and is pretty good.

3. we then popped a small amount into the bottom of some silicone cupcake cases, enough to cover the bottom and then prod the centre to make a small scoop for your eggs to sit in.

4. we then popped them in the fridge to set. the silicone cases means that once they have set you can pop them out really easily.

1. preheat your oven to 180 centigrade/gas mark 4 and pop your cases into your trays.

2. cream the butter and the sugar together with an electric hand mixture for around 3 minutes. add in the eggs one at a time and then mix for a couple of minutes after each one.

3. mix the two flours together in a separate bowl, add the milk to a jug and add the vanilla extract to the milk.

4. sift one-third of the flour into the creamed mixture together with a third of the milk & vanilla. fold in and then beat well. repeat for another third. and then again for the final third.

5. carefully spoon the mixture into the cupcake cases. and pop in the oven for around 15-20 minutes.

6. remove from the oven and leave to stand for 10 minutes before placing onto a wire rack to cool.

once they were cool we then pipped a small amount of buttercream icing on the top to stick the nests too.

2. in a mixing bowl with beat together the butter, milk, vanilla and the sifted icing sugar with an electric hand mixer until really lovely and smooth.

3. we poured in the melted chocolate and then beat again until it was all mixed in.

once the cupcakes had the icing pipped onto the top we squished down onto the top the nests. we then pipped a small amount of icing into the centre of the nests, and popped a chocolate egg or two into the nest and then nestled the little chicks in behind them.

Nanny Minnie’s first name was Amelia. Wow, was is hard to type. For a year I searched high and low for an Amelia Rose. A month before we left our old house I found one. I was told not to worry it probably won’t flower this year but will next year. Well I think you’ll find that Amelia has something different to say about that. 5 days into being in our new home Amelia has indeed flowered. It’s like she is here with us. #minniehurley #amelia #ameliarose
When some beautiful flowers arrive to welcome you to your new home, but you need to improvise with the bread bin because the vases are packed in a box somewhere nobody knows! #newhome #movinghouse
1st house on the left with the red door. We have loved you so very much and you in return have brought us much joy as family. We miss you already ❤️ #housewiththereddoor
Look away now, lunch was awful #sogood #lobster #lobstershack #whitstable
Travelling Feet - Oyster Shells #travellingfeet #fromwhereistand #feetontheground #shoesonthefloor #blundstone
Yes #whitstable #lobstershack
name me a more perfect flower? #peonies
gone fishing #eastsussex #hastings #fishing #fishingboat #nethouses
there’s no messing with these guys #sussex #hastings #seagulls
Close Me