inside the snow-covered enchanted forest, there is a magical spell-binding world that you have only ever imagined. the trees are heavy with snow, there are twinkling light galore, elves, huskies, reindeer and even mrs christmas, but where is father christmas? well you have a heap of tasks and activities to complete first before you are even close to the big man himself.

upon arrival you head over to the check in desk, where an ever so helpful elf hands you your passport and a sticker. the stickers identify which group you belong to, the huskies or the reindeer. to ronnie’s delight we were huskies, huskies are his favourite dogs so that was an added bonus.

we are greeted by an elf who gave the small and big folk a charming and witty introduction to the enchanted forest.

we are then led down a forest path, where every inch was covered in either snow or twinkling lights, it led us down to the entrance area of the enchanted forest.

before we can enter through the enormous doors to the forest we are meet by two elves, sage and eeko. whilst we sit on benches captivated by the trees and twinkling lights and of course the spectacular outfits of the elves, they explain to the excited small and big folk a little more about LaplandUK and how father christmas has selected them to come and help him in the preparations for christmas and that they have a very important job ahead of them. 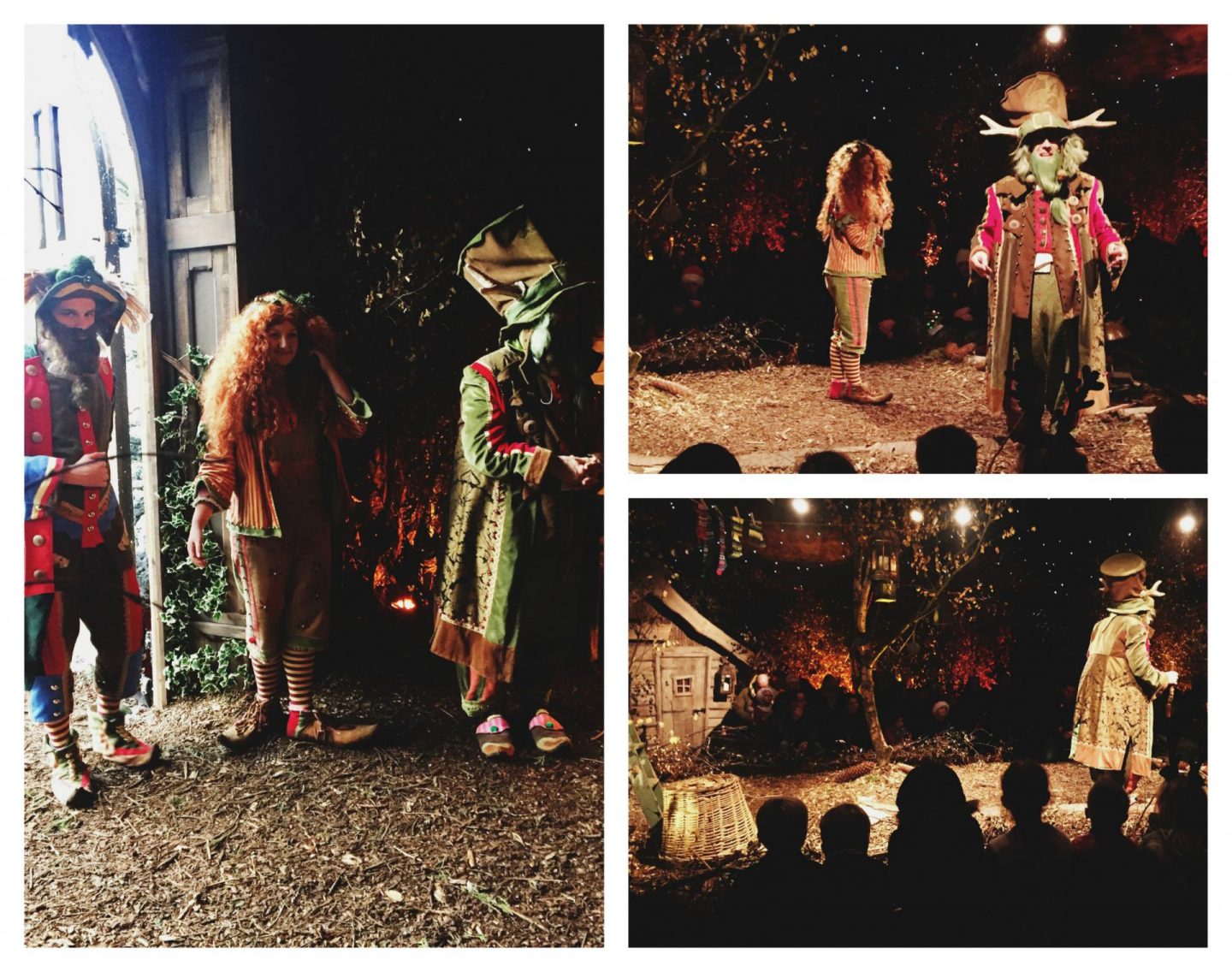 together we all sang the pass rhyme which gives us access into the actual forest, sage and eeko push open the doors and there ahead of us is the enchanted forest. wow!

first stop is the toy workshop, where santa and the elves need help making some toys. the children sit at tables and are handed out trays with parts of the toys in them. they have to put the toys together and then hand them back over to the elves to prepare them for delivery. 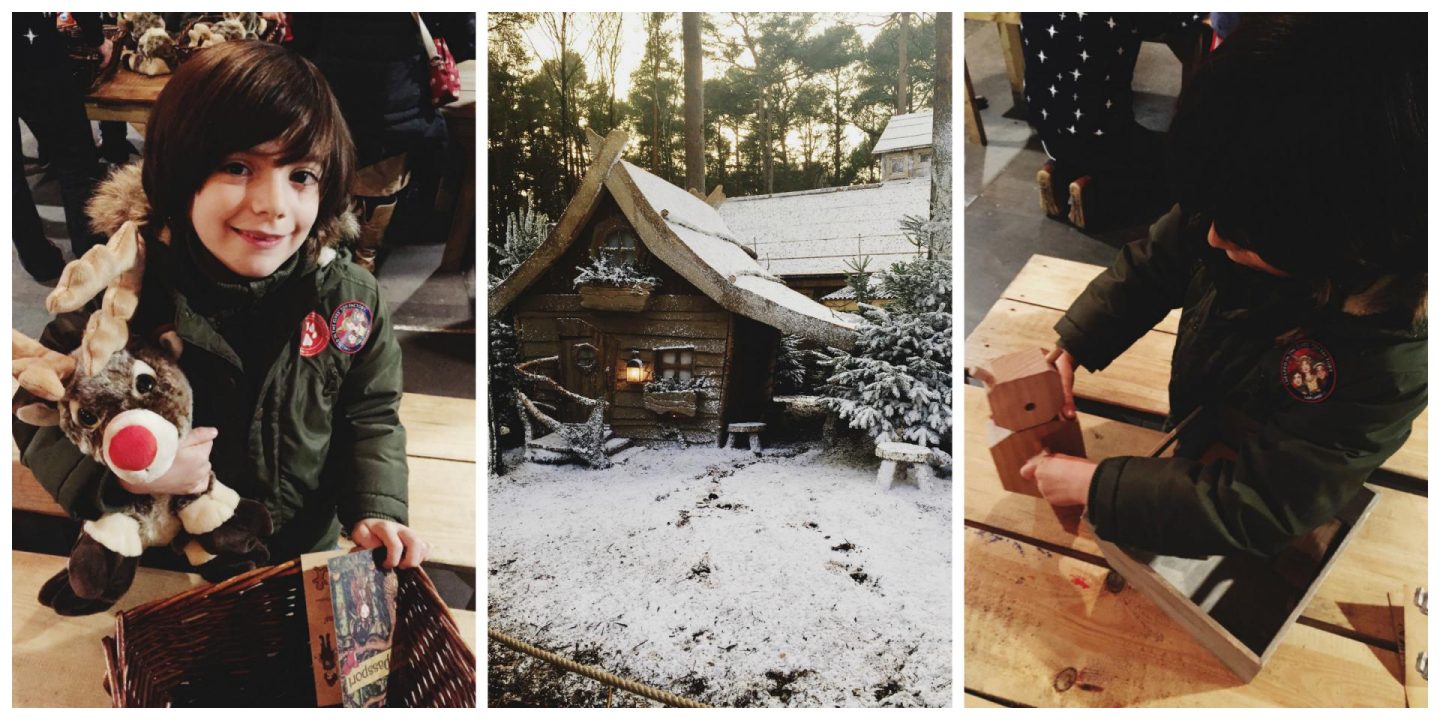 after mother christmas has inspected the hard work of the children’s decorated ginger bread men, they are packed up into paper bags for a little treat later. however she gives a very firm instruction. ginger bread is one of father christmases favourite things. however in no circumstances are the children to give their ginger bread to him. he has had enough already!

the children get their passports stamped and then gather around for a story from mrs santa.

next stop the elf village 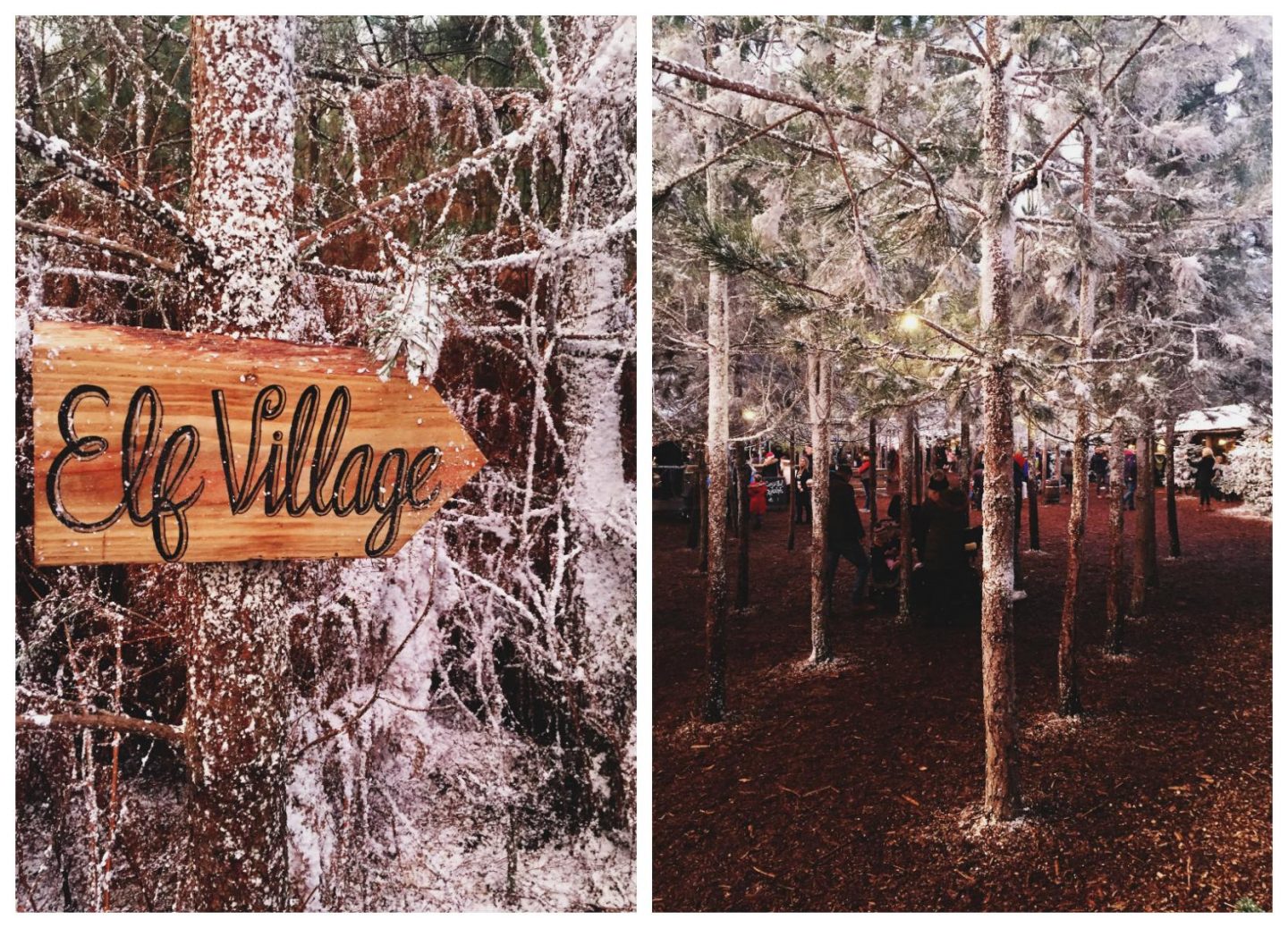 the elf village is full of activities and elf stores, to while your time away whilst you are waiting for your alloted time to see father christmas. don’t rush take your time, drink the atmosphere in.

we had a bite to eat in the elf restaurant, they had a gluten-free too hurrah! we bought sweets from mixie pixies sweet shop, a super fluffy reindeer from the gift shop as a treat from me and mr HPMcQ. ronnie also had brought some spending money with him which he decided to spend on some rather special baubles from the shop owned by an elf aptly called bauble. we went over to the post office to write a note to father christmas. to my surprise ronnie wrote a thank you letter rather than a list of more presents. he thanked him for such a wonderful day. too cute. we stamped the passport and then off to ice skating.

the sun was setting which made the elf village look even more incredible than it did when we got there. 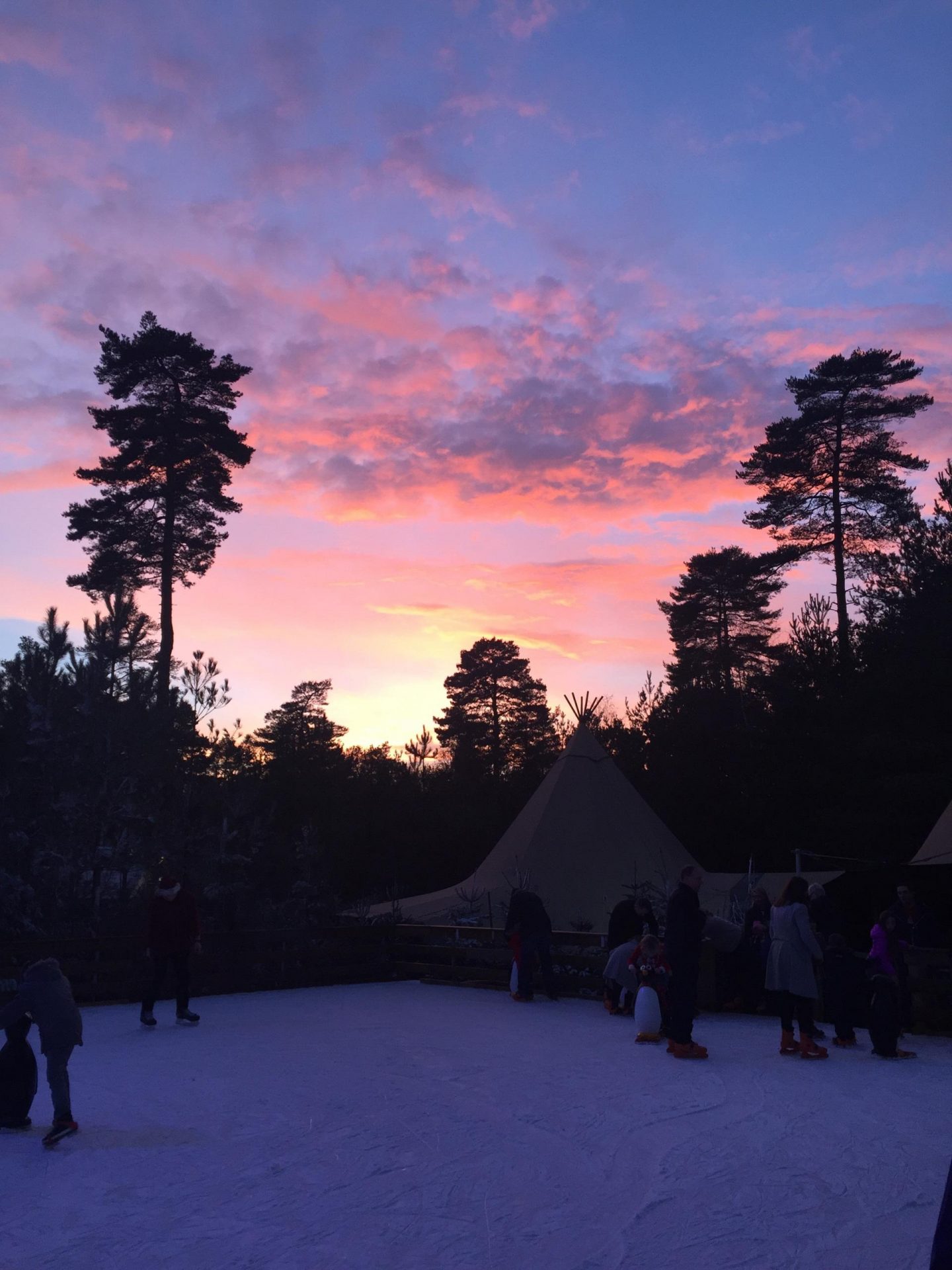 i wasn’t sure how ronnie was going to take to ice skating, he had never been before. i thought it was going to be short-lived but we struggled to get him off the ice both times! 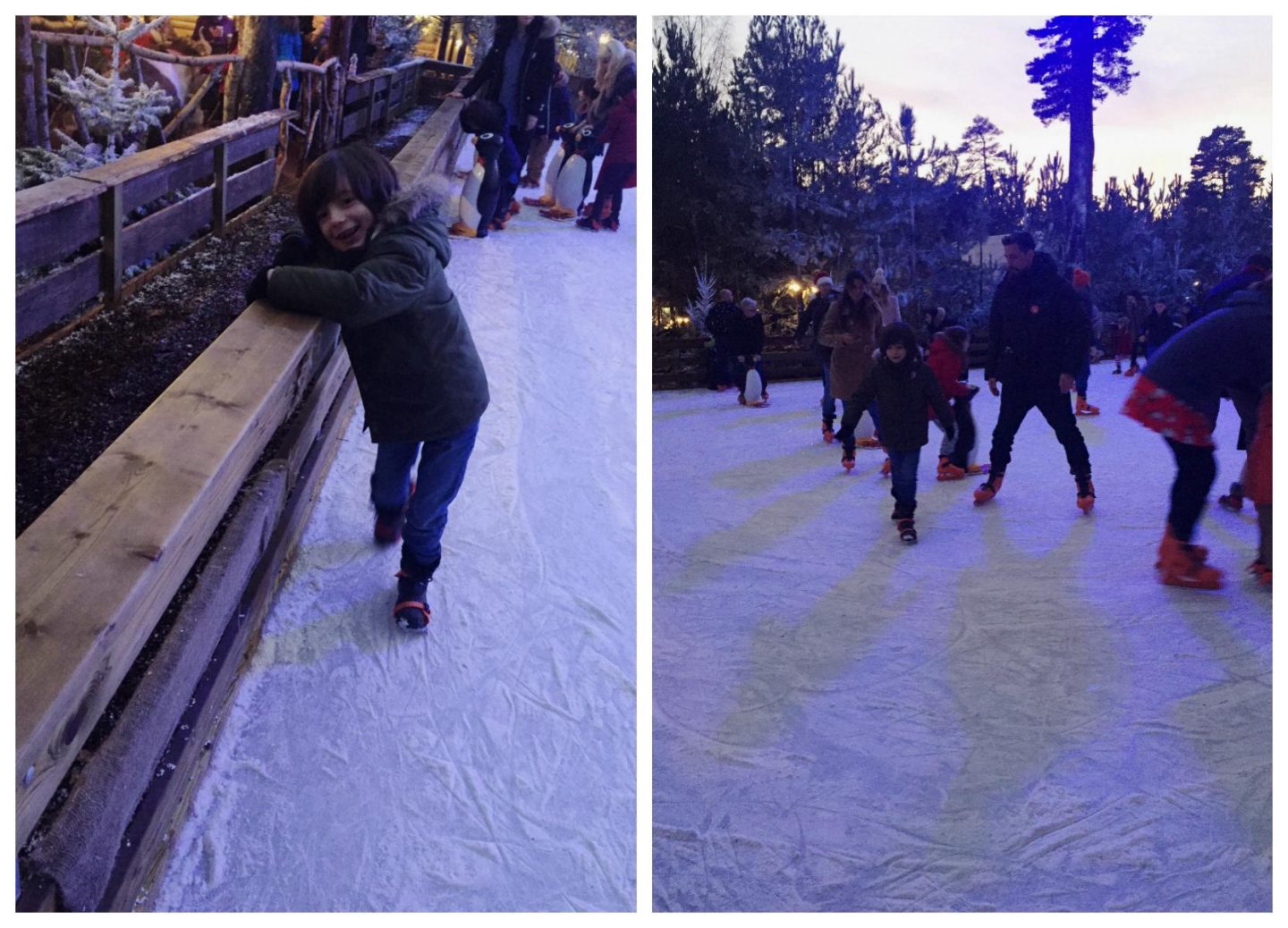 the only way we did manage to get him off the ice was the arrival of the huskies. could a boy look any happier? 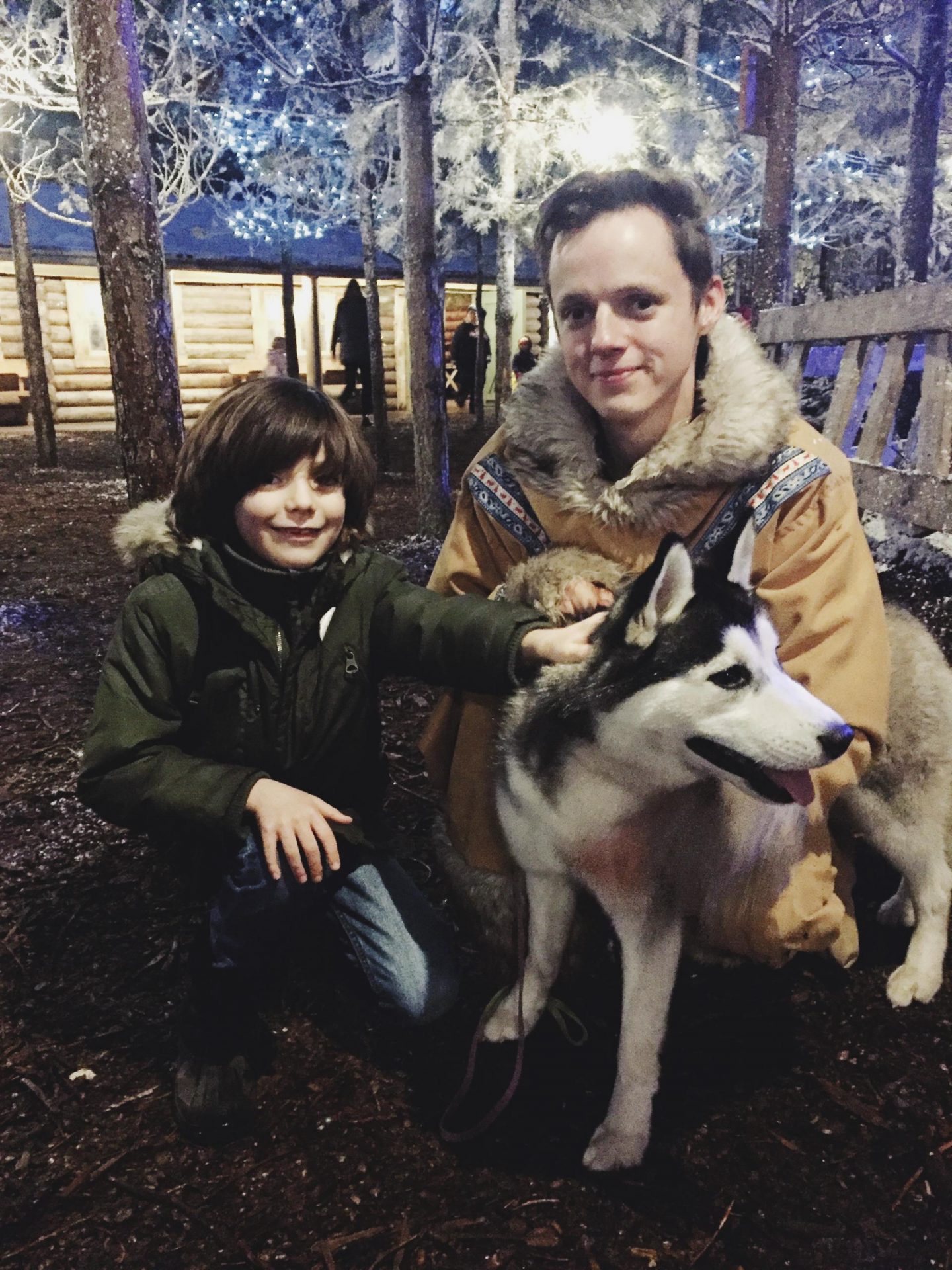 at the back of the elf village is another gate, beyond that gate is father christmas, but that’s not just it before you even get to father christmas you embark on another magical journey. 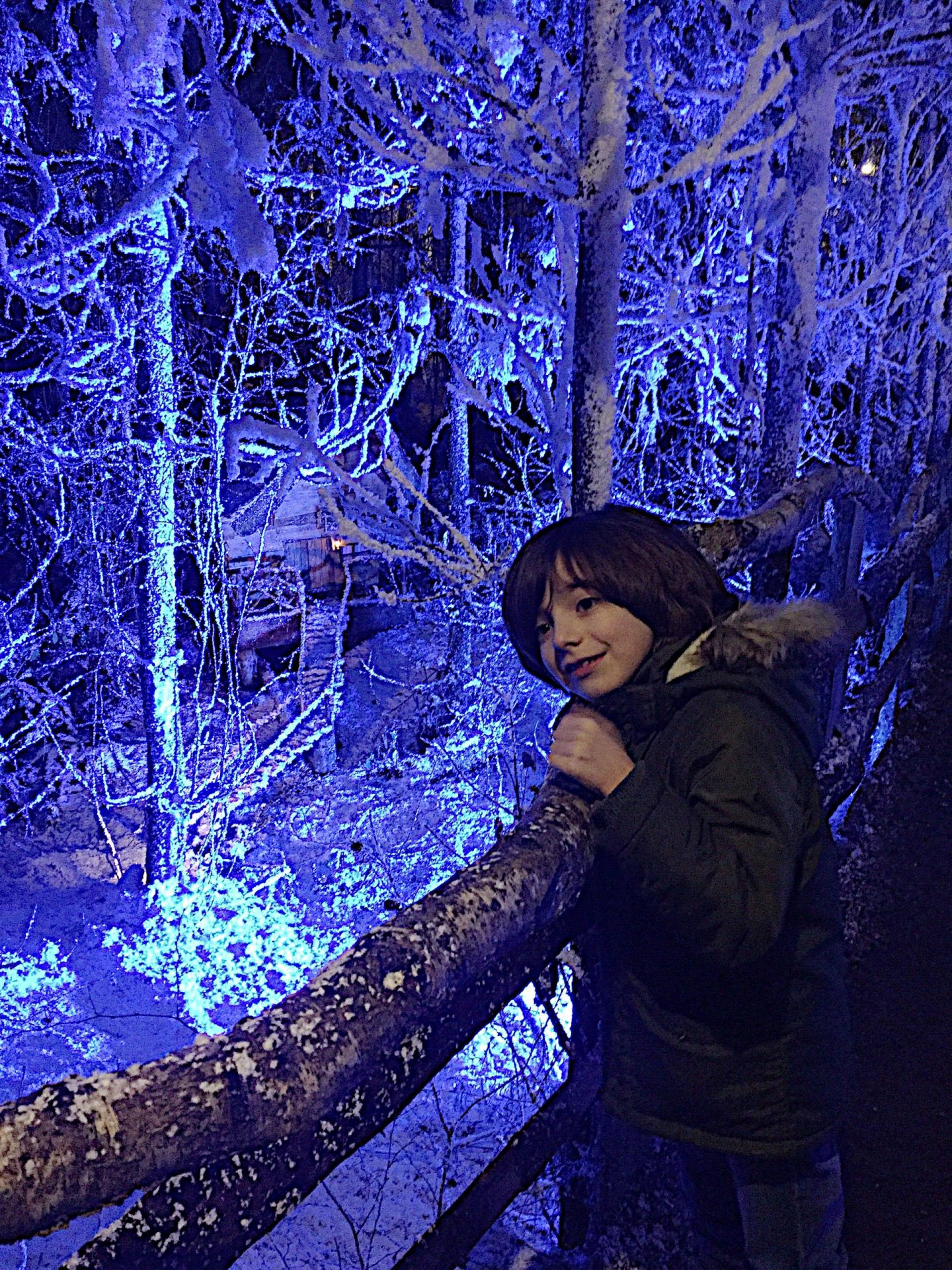 along the snowy paths you wander through until you come to a small clearing where the reindeer are resting and father christmas’ sleigh is parked,  two elves are busy making bells and magical keys in their workshop.

we follow the path round and arrive at the father christmas check in and waiting room. here we waited for a couple of minutes or so until our elf arrived to show us the way to where father christmas was waiting to see us.

the elf arrived and greeted ronnie, letting him know that father christmas was now ready to see him. he lead us through the maze of the forest, twisting and turning through pathways of dense and heavily snow-covered trees until we came to a clearing and there it was. father christmas’ hut. the elf asked about our day, and ronnie happily told him ALL that had happened. just listening to him recalling everything made me realise what a wonderful day it really had been. 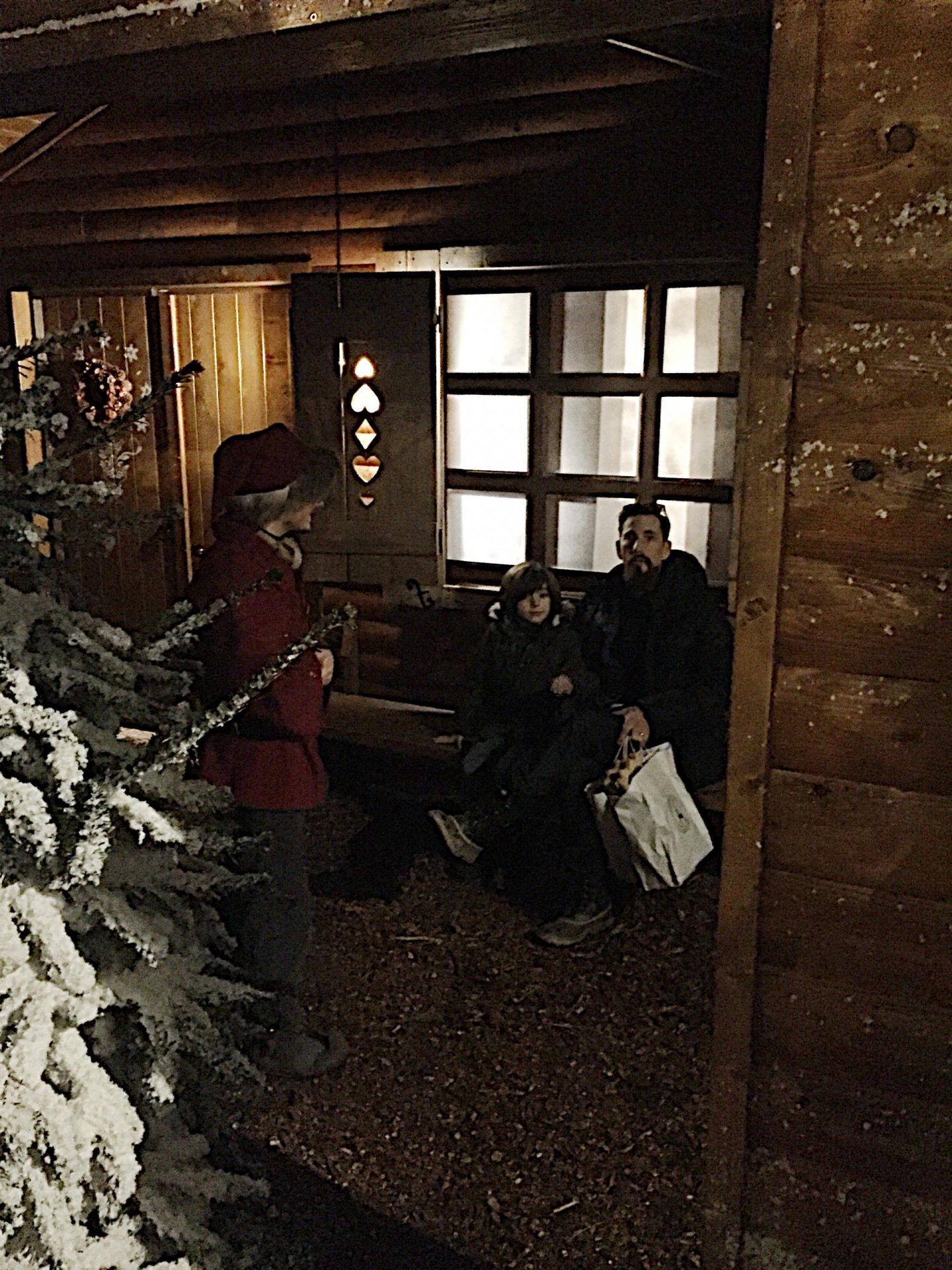 and then it was our turn, the door opened and in we went. father christmas and ronnie chatted about the days events, he checked to see if he was on the naughty list, he wasn’t phew, and then he thought he could smell gingerbread… hmmmmm we convinced him this wasn’t so and that we didn’t have any with us, mother christmas would be proud. then from his sack he pulled the most adorable soft husky, ronnies face immediately lit up, just in time for that all important shot! 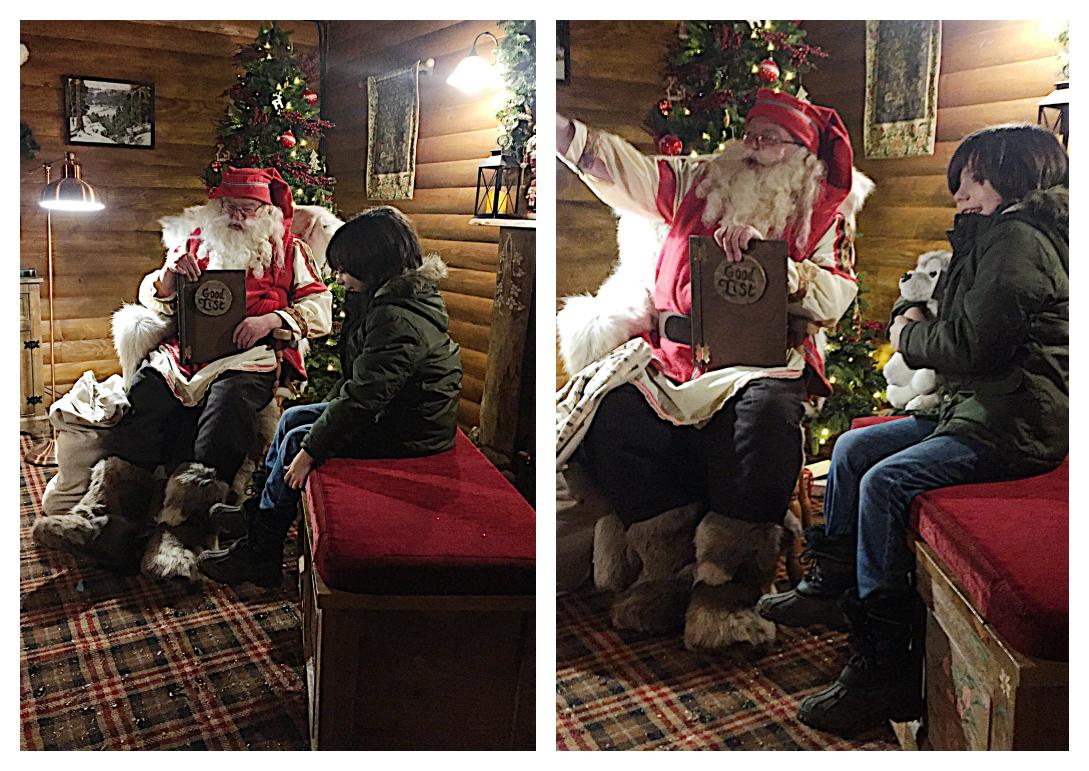 as we left ronnie’s face was a picture, clutching both his husky and his reindeer he was already asking if we could come back next year, he, actually strike that, we had such a wonderful day, a truly wonderful day. one that will be remembered for a very long time indeed. 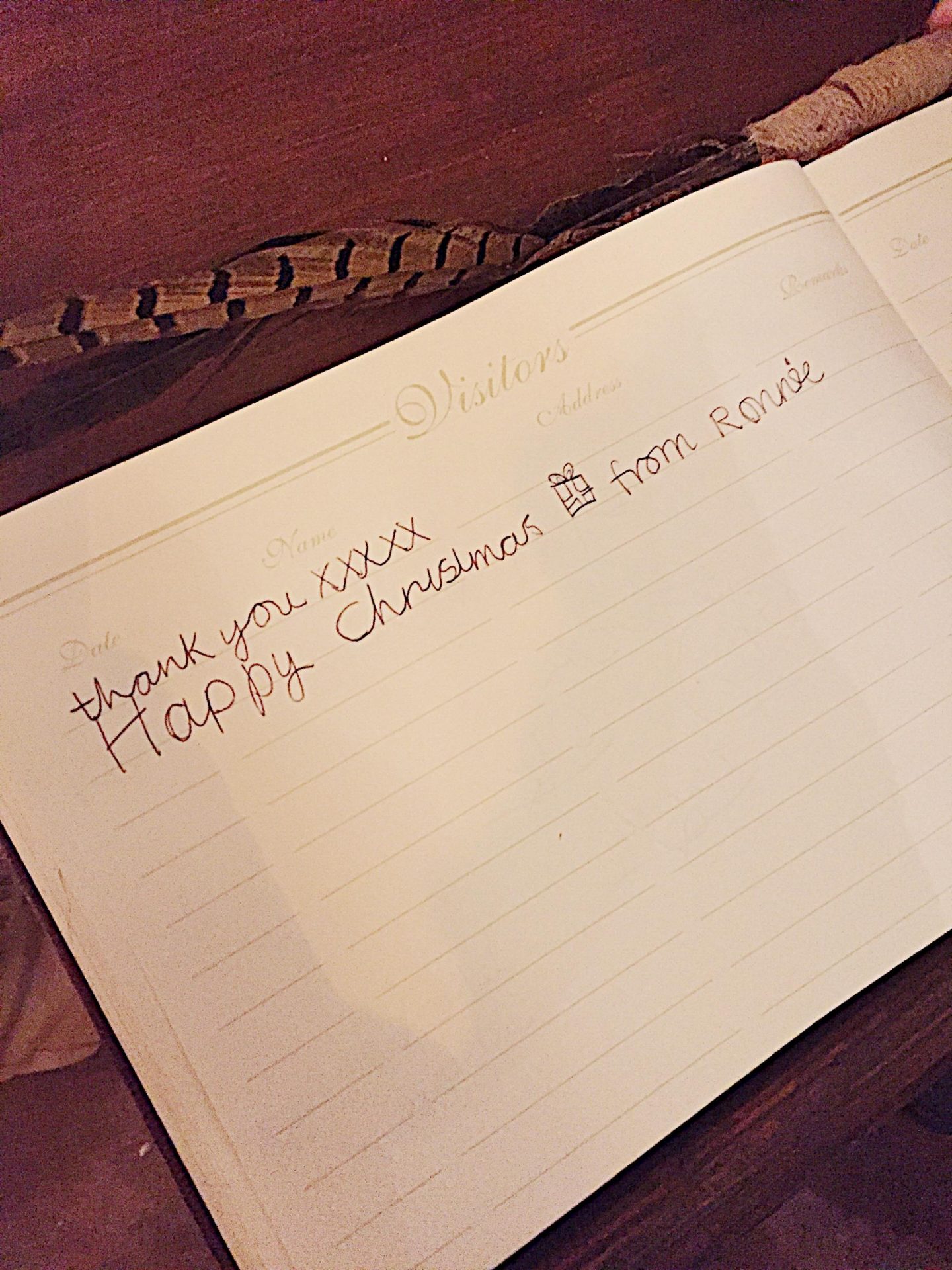 book guaranteed times and dates that you want for christmas 2017

tickets will be frozen at 2016 prices or below

save up to 20% by booking on these special 10 days

disclaimer : we were invited as a family to visit LaplandUK free of charge. we are thrilled to have been asked to review our visit and to cover our visit both on social media and on this blog. it goes without saying i am always honest and my views and opinions will always be my own.