the image of the bus that is famous world-wide is that of the route master. built in 1954, it became a principle icon of london, a big red double-decker with its rear entrance and platform. sadly these have been largely phased out but the majority of the more modern buses still keeping a similar shape and colour.  only two heritage routes still using these iconic buses, one being the 9 which runs through the heart of the royal borough of kensington past the royal albert hall, through knightsbridge onto hyde park down pall mall and finishing at trafalgar square, a great ride to have if ever visiting the city of london. this also happens to run past the head office of the white company, which neatly brings me onto… 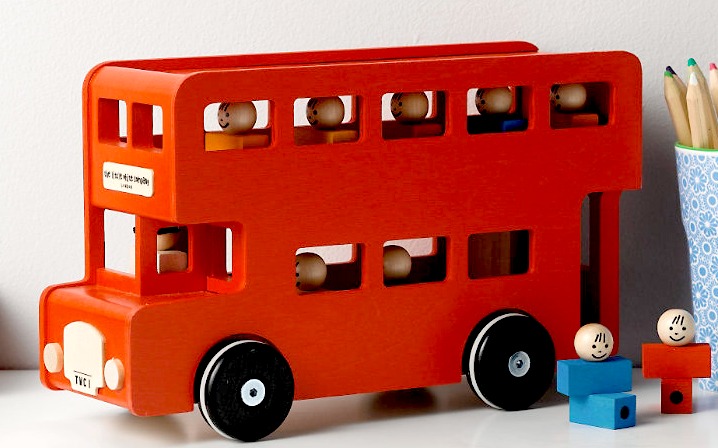 the little white company have another great give away for little ones of ten lucky readers of HPMcQ, the exclusive lwc london bus. lwc have had a london bus in their range since i can remember, however it has had a rather major make over by the skilled craftsmen and women at bajo. the roof is still the same and is removable, so that the top and lower decks can be accessed. the wooden passengers now have elasticized hips which means they can stand, sit and turn their heads to look out the windows. the finishing of the product is beautiful and instead of being completely painted, the bus is a great mix of natural wood and a coloured stain. which gives a modern contemporary look. trademark details remain such as the signage which say the little white company and the number plates front and back are twc1. it’s equally a home as a decorative piece in a childs room if they are not yet old enough to play with it.  what a wonderful christmas gift for the little one in your life.

all you need to do to win one of these fabulous buses is to use the rafflecopter form below. remember i have ten of these beauties to give away so there will be ten winners!

ding ding, all a board!

– this competition is open to residents of the UK only aged 18 years or over, except for those associated with the white company or their families.
– the closing date is midnight on the 11th december 2013.
– the winner will be chosen at random by the random winner generator on rafflecopter and notified within 5 working days by email.
– the winner will need to provide us with a postal address for the car to be posted to. the white company will arrange delivery. if the winner does not respond with a postal address within 14 days of contact the giveaway will be re-drawn and the prize re-allocated.
– the winner must have fulfilled the mandatory requirement.
– the prize is not transferable, and there is no monetary alternative.
– HPMcQ is responsible for the first part of the promotion, which is the publication and adjudication of the competition. fulfilment of the prize is the responsibility of the white company.

disclosure: no compensation was received for running this giveaway. i am indeed an employee of the white company, however the blog of HPMcQ is purely personal and not connected to the white company in any way.